Who is The Predator’s Greatest Prey? 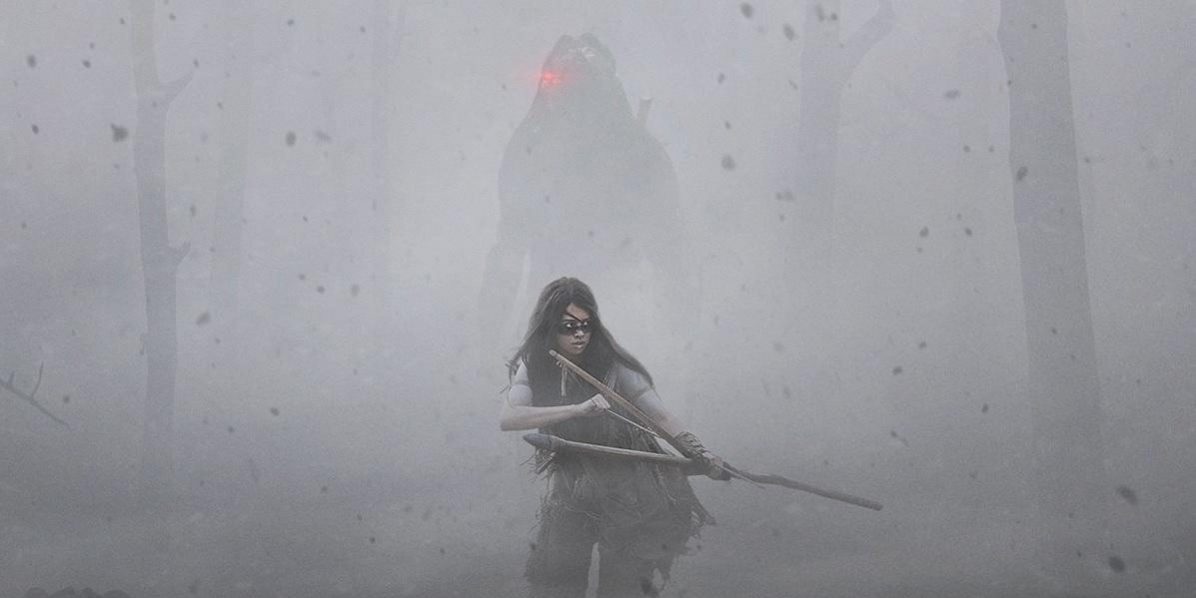 Prey, the latest installment in the long-running Predator franchise, is now streaming! It features the vicious alien hunters stalking Native Americans three-hundred years in the past, a time when human technology was even further from the Predator’s weapons than it is now. It’s a fun watch that brings the franchise back to its smaller-story roots after a couple decades worth of story escalation that did the movies few favors. Anyhow, we’re celebrating its release by looking at some of the Predator’s greatest hunts from its many, many comic book crossover appearances! 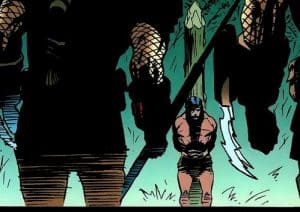 We thought we’d kick things off by tackling the story most like Prey, at least in terms of match up. Tarzan vs. Predator: At the Earth’s Core #1-4 is a 1996 Dark Horse Comics mini-series pitting the Edgar Rice Burroughs’ legendary Lord of the Apes against Predators. It kicks off with Tarzan receiving a distress call from the kingdom of Pellucidar, a primordial land at the center of the hollow Earth. He leads an expedition of British soldiers and native African warriors to the Earth’s core. They quickly discover that the extraterrestrial Yautja, a race of fearsome Predators, are using Pellucidar as their hunting preserve. Dinosaurs, humanoids, it doesn’t matter – if it’s a challenge, they want to kill it and take the glory. The Yautja quickly slaughter the British troops.

Luckily, Tarzan and his native allies know a thing or two about battling a technologically superior force in the jungle. Tarzan manages to create a coalition of his native allies and Pellucidar‘s nonhuman tribes. This force is able to rid Earth’s core of its Predator infestation, albeit with considerable effort. The tale ends with Tarzan & friends having wiped out the Yautja and setting things right in Pellucidar. In all, this is a fun match up between between Burroughs’ fantastical, primordial fantasy worlds and the high tech alien hunters. It’s explicitly teamwork between Tarzan’s allies that allow them to route the Yautja, who favor hunting solo even when they travel in packs. 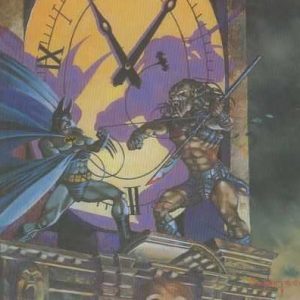 The Dark Knight went up against the Predators a total of three times in the 1990s. The Yautja had chosen Gotham City as a favored hunting ground. Between the first Dark Horse Comics Predator mini-series and 1990’s Predator 2, urban settings were en vogue for new Predator stories in the early 90s. DC and Dark Horse published the first Batman/Predator bout in 1991.Ir was a pretty standard urban Predator story, with a detective trying to solve a series of incredibly violent murders and finding a Predator. Only this time, the detective is Batman.

The second, which also a team-up between Batman and the aptly-named Huntress, bowed in 1993. It featured the uneasy allies going up against a young Predator who wants revenge on Batman. Meanwhile,Yautja want to bring down this young hunter in for his breach of honor. Batman and Huntress hold their own OK against the renegade, but nearly die in crossfire between extraterrestrial factions. Turns out all the gadgets and crossbows in the world only help so much against falling spaceships.

The third and final battle came out in 1997. This time, a father-and-son team of Predators set their sights on Batman and Robin. In all, the three mini-series formed a fun little What If? universe. It featured Batman learning from each encounter, never quite equaling the Yautja but getting wiser to their tricks with each hunt. It also featured the Predators developing a respect for The Dark Knight…which is dangerous for him, as it means he’s becoming their White Whale. They were in-continuity with later DC Comics hunts, which makes DC one of the more extensive Predator continuities. 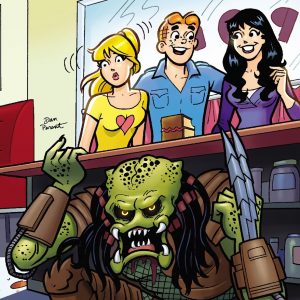 Yes, yes, this is a real mini-series! Two, actually. The last decade or so of Archie Comics has seen the company embrace a certain amount of irony that it has, historically, lacked. This has lead to the boom of Archie Horror titles, as well as self-aware crossovers. Drawn in the classic Dan DeCarlo style, the first mini-series sees the Riverdale Gang taking a vacation to a tropical resort. A Predator stalks the jungles around it, and witnesses a fight between Betty & Veronica. Betty’s nose is broken and she blames Cheryl and Jason Blossom for orchestrating the whole caper. The Predator follows her, listens to her complaints from a distance, and murders the Blossom Twins by way of revenge.

The Predator follows the gang back to Riverdale, where he begins killing its residents like a movie slasher. The gang is whittled down to just Archie, Betty, & Veronica. The Predator, as it turns out, is a juvenile motivated by a crush on Betty. It manages to kill Archie in the final conflict before Betty & Veronica team up to mortally wound him. This triggers his self-destruct device, but the Predator drags the girls into Lodge Manor’s panic room before it detonates. Veronica wakes up to find both she and Betty have been healed by her family’s high tech medbed. Betty is now using the medbed to transform The Predator into a copy of Archie.

This one of the weirder Predator hunts, and deliberately so. It definitely ends with a very esoteric happy ending for both of Archie’s girlfriends and its Yautja antagonist. It features The Predator breaking its species fabled Code of Honor, though admittedly the movies had kinda done away with that before this comic came out. Then again, this Predator is explicitly a teenager with a crush on a girl – a prime circumstance for a lapse in ethics. 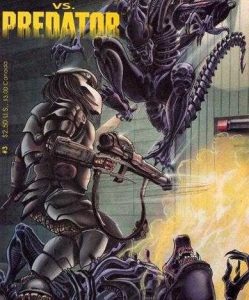 Fifteen years before this match-up hit the big screen, it debuted in the pages of Dark Horse Comics. Already publishing licensed Alien and Predator stories, Dark Horse Presents #34-36 put the two together for the first time. Taking place in the future era of the Alien franchise, it featured the two species clashing on the struggling human colony world of Ryushi. The Predators specifically brought the Aliens, or Xenomorphs, to the planet, which they expect to be largely uninhabited, for a ritual hunt. Between the humans and the cattle they’re ranching on the planet, Xenomorph breeding quickly gets out of hand. The situation quickly devolves into a three-way battle for survival

Predator elder Broken Tusk and colonial administrator Machiko Noguchi recognize that the Xenomorphs are a common enemy. They set aside the bad blood that has developed between their peoples and work together to end the infestation. Broken Tusk, mortally wounded, accepts Machiko as a member of his clan. It is the beginning of beautiful, blood-soaked friendship.

And what a friendship it was! Alien Vs. Predator expanded to seven video games, four novels, a trading card set, a trading card game, a line of toys from Kenner, and dozens of comic books before it ever appeared on the silver screen. And it’s all because some editors at Dark Horse thought “Hey, this would be cool.”

Dark Hose Comics held the Predator license for nearly thirty years. And if there’s one thing Dark Horse Comics loves, it’s a crossover. The Predator faced off with The Terminator, the Justice League, Judge Dredd, Superman The Darkness, Witchblade, and even Magnus, Robot Fighter, over the years. Many of these crossovers ultimately involved the Xenomorphs too, chronicling three-way brawls of lethal consequence. Heroes from most major publishers faced off against The Predators at one point or another in the Dark Horse Comics era.

Then 20th Century Studios got bought by Disney. They moved the license over to their vertically-integrated comic book arm, Marvel Comics, at the first opportunity. With Marvel controlling the Predator license, it’s unlikely we’ll see any new crossovers. Or many reprints of the old ones, for that matter. Even in the intercompany crossover heavy 1990s, Marvel was a tad isolationist. That’s only increased since they joined the Disney empire. Which is a shame, since they also license Ultraman and how amazing would Ultraman vs. Predator be? Or how about Punisher vs. Predator? The possibilities are endless!

But that might mean some enhanced values for those older comics. If you’ve got them and decide to sell that collection, it wouldn’t hurt to let collectibles experts like Back to the Past have a look first. It’s our job to get you the best value for that collection! We’ve got happy consignors lining up to tell you that we do that job quite well.