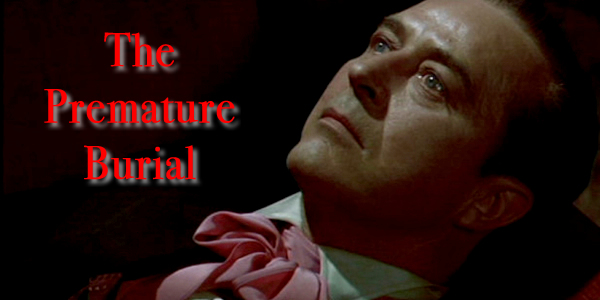 The one-two punch of House of Usher and Pit and the Pendulum pretty much guaranteed that there would be more Edgar Allan Poe adaptations coming out from American International Pictures.  For his third adaptation, Roger Corman decided on Poe’s short story, The Premature Burial, about a man who is obsessed with the notion that he will be buried alive and the lengths he would go to protect himself.

For some reason, Corman moved the project to Pathe Lab and, since Vincent Price was under contract with AIP, he chose Ray Milland as his leading man. On the very first day of shooting, AIP execs showed up and kindly pointed out that Corman, himself, was also under contract with AIP and what’s all this, then?  Corman obligingly brought the picture back to AIP and it became the third in the “Poe cycle,” the only one of the films that did not star Vincent Price.

How would Ray Milland’s film stack up against the first two?  Let’s take a look!

Synopsis of The Premature Burial

Guy Carrell (Ray Milland) is haunted by the specter of being buried alive, positive that his own ancestors were afflicted by catalepsy and interred alive in the family crypt.  His new wife (Hazel Court) and his sister (Heather Angel) do their best to take care of him as he gets increasingly feverish with his obsession, building an escapable crypt stocked with every conceivable remedy to ensure he wouldn’t be stuck inside it. Inevitably, he does end up buried alive, but escapes and furiously wreaks vengeance upon those entrusted with his well being.  The film ends with the reveal of the true villain.

Things We Loved in The Premature Burial

The spooky sets were a little too much “Main Street Halloween” with fake trees and wisps of fog, clearly on a soundstage somewhere.  However, the cinematography within those confines has some great high points.  Pay attention to the fate of the grave-robbing doctor and how Corman used the shadows to complete the grisly scene!

Things We Didn’t Love in The Premature Burial

Ray Milland was a great actor (Lost Weekend!), but he seemed to only have two speeds: “Aristocratic Gentleman” and “Annoyed.”  This makes the trip down to madness feel a little stilted.  We couldn’t help but ponder how much better Vincent Price would have played it, which is pretty unfair as Milland does a decent job.

There is a point in the movie where we are supposed to accept that Guy Carrell and his new bride are happy and content with life, out walking the grounds of their palatial estate.  However, since the whole film is made in a spooky graveyard setting, it never rings true.  Note when Emily bends down to pick some flowers to cheer up the house and she disappears into the murk as the fog swirls around her so thickly that you can’t even see the ground or the flowers.

While the constant spooky setting was a bit much, it didn’t help that it was painfully obvious that they were on a sound stage. The only thing missing was a giant blinking “quiet on set” sign.

In the end, it’s tough to feel for the characters.  I mean, you are obsessed with death and you live in a depressing foggy graveyard, how, exactly, did you expect this was all going to turn out?

In each of the first three films we’ve looked at, so far, the punchline is right there in the title.  In Fall of the House of Usher, we know the house is going to come down.  In the Pit and the Pendulum, we’re waiting to see said pit and said pendulum.  In Premature Burial, can you guess what we’re waiting for?  We’ll give you one shot at the answer… So, what we’re doing in each movie is enjoying the trip to the inevitable conclusion inherent in the title.  But, whereas the first two filled that time with more compelling content, Premature Burial more or less plods along until Carrell is pushing up the daisies.

Speaking of which, Guy Carrell finds a way to put himself at ease about the possibilty of being buried alive, but the reveal of his plan is a bit much. It goes from clever to absurd pretty quickly and begins to make light of a dark subject.

Our Rating of The Premature Burial

Scott gives it a thumbs down.  Definitely the weakest entry in the Poe Cycle, thus far, and only requires a view if you’re a completist.

Mike gives it a thumbs down. We’re not sure even Vincent Price could have saved this movie.

What did you think? Let us know your thoughts and observations about the Premature Burial in the comments.

For our next Watch It! we’re moving to the fourth of Corman’s Edgar Allan Poe movies: Tales of Terror (1962), an anthology title starring Vincent Price.  Watch it by Monday, 9/22 and look for our next column!