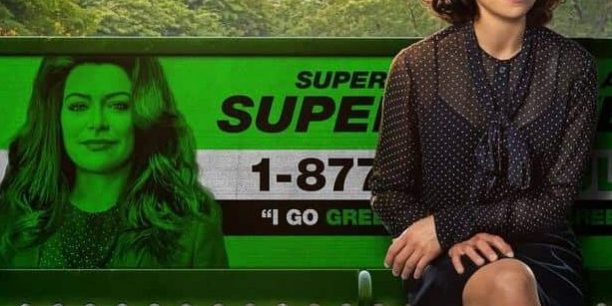 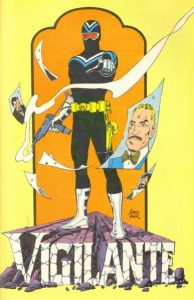 “But wait,” you’re thinking “I’ve watched Peacemaker! Vigilante’s a bus boy!” Which is true. But in the comics, he was a lawyer. Like ShadowHawk (keep reading), Adrian Chase starts off as a morally upright District Attorney in New York City. He’s the New Teen Titans’ friend in law enforcement, working with them to take down super-criminals and mob enforcers. Except not all of those apprehensions stick,and Adrian gets frustrated with how petty things like “following the law” and “respecting civil rights” tie the hands of government in dealing with crooks. The final straw for him his the bombing murder of his family by the mafia. Which seems, y’know, fair.

He moves out west to recover, where he runs across a coven of restless spirits. They’re innocent people who were murdered and never received justice, and they have selected Adrian as their champion. Adrian learns to be a crack shot, a master martial artist, a nunchaku expert, and (most oddly) how to heal super-humanly fast. Adrian returns to NYC in an RV filled with weapons as The Vigilante, who inflicts deadly justice on the criminals the law can’t reach.

Chase didn’t return to practicing law but did quickly run for an open judgeship…and win. Judge Adrian Chase struggles with his desire to settle down and fight within the system once more and the violent tendencies he’s developed as The Vigilante. It really doesn’t help that the writers of his solo series, and consequently Adrian Chase himself, really don’t know a lot about the law. It’s really easy to get fired up about “technicalities that favor the guilty” when you believe that a search warrant for an airfield only covers the runway. Adrian Chase comes in last on this list of Superhero Attorneys not because of his bloody Vigilante crusade but because he was terrible at law. 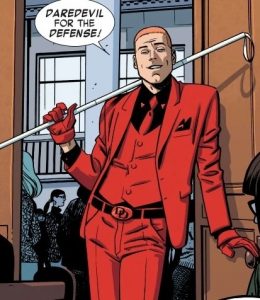 Marvel’s first and best known superhero attorney! Yes, Matt Murdock has been practicing both as an attorney and a superhero since his debut in Daredevil #1 in 1964. His specialty has pretty well always been a mix of Civil Rights and Criminal defense, devoting himself to defending the little guy even when the little guy isn’t particularly good. This has included numerous stints defending villains he had fought, which seems like a bit of an ethical breach.

That said, he would place higher on this list if superhero baggage didn’t interfere with his job! The earliest version of that was having to lead a bizarre triple life, inventing a twin brother named Mike to serve as Daredevil’s secret identity.

In fact, Matt Murdock just cannot keep his usual dual identity a secret! From anyone! He’s been targeted by supervillains, arrested and jailed, blackmailed, and perjured himself in court as a result of his ID getting out. Heck, there was even a period of time where he was very publicly Matt “Daredevil” Murdock, Attorney at Law. Didn’t have much choice, as it was the only way out of the aforementioned blackmail. He even donned a snazzy custom suit that combined “Daredevil” with “business formal” during that era. Which is really cool, but the whole thing is a entirely too distracting for his branch of law. Most judges won’t be moved by “I missed that filing deadline because my lawyer was fighting ninjas, your honor”. 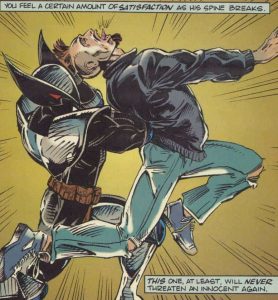 Paul Jonhstone was born in Harlem, NY and thrived despite desperate poverty thanks to his loving parents. He got an education, went to law school, and ultimately served in the New York City District Attorney’s office. While that would place him on the wrong side of many superhero lawyers, he was an upstanding and by-the-book DA. The Mafia are displeased to find that Johnstone absolutely refuses bribes. So they squeeze him by denying his brother, addicted to narcotics, his fixes until Paul complied. Which was not effective, as Paul quite reasonably wasn’t a fan of his brother’s addiction and thought that perhaps an inability to score would be helpful.

So the final tactic was batcrap insane. They had a hitman attack New York District Attorney Paul Johnstone in his office. With a syringe. Filled with HIV infected blood. Reminder: though HIV is a treatable chronic condition today, it was a death sentence back in 1992. But the real goal was to make Paul a pariah in the office. Paul eventually snapped, decked a loudmouth colleague, and was fired for it

It’s only then that he teams up with disgraced ex-cop Christina Reid to devise the vigilante identity of ShadowHawk. Like Daredevil, ShadowHawk focuses on street level crime. Unlike Daredevil, ShadowHawk aimed to make a permanent difference: his “signature” was punching crooks in the back hard enough to paralyze them. Yeesh. It’s a good thing he’d quit practicing by then, we question the ethics there. We admit, he’s a superhero and attorney but was never a superhero attorney. Which is what makes him one of the better lawyers on this list, really. 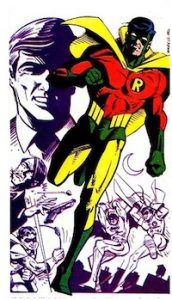 The Golden Age version of Batman’s iconic sidekick Robin returned as a grown-up in 1965’s Justice League of America #55! Dick Grayson took his mentor’s place in The Justice Society of America, the top heroes of DC’s Earth-Two. Additionally, he’d earned his law degree between his last “Boy Wonder” appearance and his debut as “The Man Wonder”. Dick’s dayjob was as a named partner in the firm of Cranston, Grayson, And Wayne. The firm is a public interest firm fighting for safer products and tighter regulations on behalf of the American consumer. Worthy, if not very glamorous, work AND a specialty that sidesteps the ethical difficulties that arise from crime-fighting. Even super-villains need safe cars, y’know?

Grayson’s successes as a lawyer (and status as the adopted son of millionaire) earned him ambassadorship to South Africa. Notably, Earth-Two’s South Africa wasn’t an apartheid state and enjoyed majority rule in 1978, so Dick’s work wasn’t particularly problematic. The Man Wonder’s return to the law came in the pages of America Vs. The Justice Society, a 1985 mini-series that saw Dick act as congressional special prosecutor. The JSA is implicated as Nazi sympathizers in a diary supposedly written by Batman, very serious allegations for a reliable source. Congress picks lawyer and retired Ambassador Grayson as the man to try the case. Admittedly, Dick plays it fast and loose with ethical conflicts in this one instance but does his job to the best of his ability despite being in a very awkward personal position. After a career spent avoiding such conflicts, one slip (if major) is forgivable. 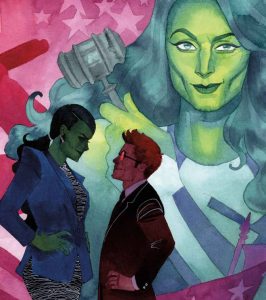 Yes, Shulkie is the best superhero attorney in our book! And not just because she’s got her own show now. See, unlike the folks listed above, Jennifer Walters successfully balances being a superhero and a lawyer. In her earliest appearance, she was a prosecutor and chiefly turned into She-Hulk to battle mobsters trying to kill her. Which, fair dinkum, is a bit of an ethical breach considering she also prosecutes them. But y’know, it’s hard to feel bad for mob bosses and hitmen who try to rub out public servants.

In joining The Avengers full time, Jen mostly retired from the law. That was reversed in 2004’s She-Hulk #1 when she was hired by law firm Goodman, Lieber, Kurtzberg & Holliway for their burgeoning superhuman law division. Specifically, they wanted her as decorated lawyer Jennifer Walters and pointedly not as She-Hulk. That said, the powers did come in handy in dealing with unruly superhuman clients.

Even better, an actual lawyer wrote her 2013 solo title! Charles Soule, practicing attorney turned full-time comics and sci-fi writer, handled scripting duties for that particular series. Suffice it to say, the portrayal of the legal system is very much on-point in that run. The best story was in #8-10, where Shulkie teams up with Captain America to battle Matt “Daredevil” Murdock! In civil court, over an alleged wrongful death Cap caused back in the 1940. When not on sabbatical, Jennifer Walters is the gold standard of “superhero attorney”.

Lawyer probably comes in fourth on the list of most common superhero day jobs (behind “doctor”, “high schooler”, and “fabulously wealthy layabout”). That means you may well have a favorite that we didn’t write about! Let us know in the comments or on social media. And if you want a comment or quote from us on something we’ve written about, we’re always available! We can be found almost everywhere in the social media sphere as @b2pcollect.

As for a collectibles takeaway, She-Hulk: Attorney At Law is poised to bring a whole bunch of new characters to the Marvel Cinematic Universe! That means a whole mess of semi-key issues are poised to become key and key issues are poised go up in value. The TV shows don’t give away nearly as many of their cards as movie trailers do, but the time to sell is while the show is currently airing and we’re here to help make that happen. If you’ve got those key issues and are looking to turn them into cash, give us a call!