How Much Did That Restaurant Menu Sell For?? 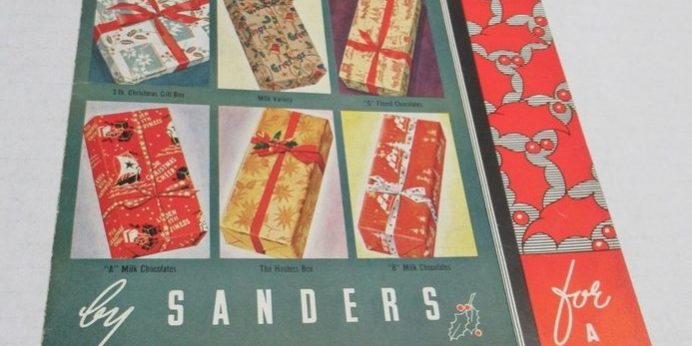 Welcome back to Hammer Drops! Every Wednesday, the collectibles pros at Back to the Past share our collective century’s worth of industry experience with you. This week is no different, and we’re looking at a group of eleven lots from our December 18th auction session. The question to answer is this: why did menus from a mostly defunct restaurant sell for a total of $1,500? 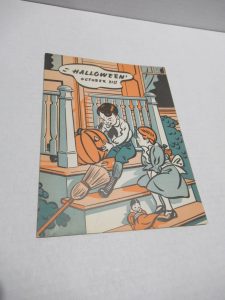 This story begins in 1875. Fredrick Sanders, candy shop and soda fountain operator, was chased out of Chicago by the Great Fire and settled in Detroit. The Motor City thanks Mrs. O’Leary’s cow for the wonderful gift, as Mr. Sanders’ Detroit store would be a local institution for more than a century. It introduced the Ice Cream Soda to Detroit, it was one of the first in the nation to offer carry-out service, an early adopter of refrigeration technology, and just generally was on the cutting edge of food service.

At its height, Sanders operated a whole chain of candy shops, both standalone and in malls, and sold its products in 200 grocery stores. Its most legendary offering was introduced in 1913: the bumpy cake. Unfortunately, the increasingly standardized and corporatized 70s & 80s weren’t kind to regional wonders like Sanders. Its flagship location on Woodward Avenue closed in the late 80s. Since 1988, the name “Sanders” and its recipes exists only as a brand of other candy makers.

Sanders is still around, but a quick look at these vintage menus tell you how different the modern version is very different from the original. It is “just” a higher end boutique candy shop, where as the Woodward Ave location was a full lunch counter back in the day. We’re glad that Sanders is still around and still locally owned, heck I remember pitching woo to my high school sweetie with their chocolates. That said, they’re not what they once were. 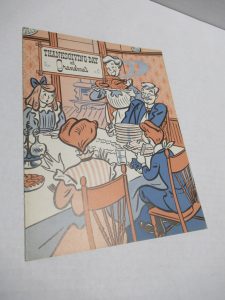 The Lesson: There’s Money In Nostalgia

Generations of Detroiters remember Sanders as a downtown destination and a local institution. The very generations whose preference for standardized national brands in the 80s knocked Sanders off its throne now miss it. It is that sense of nostalgia, of missing a time long since past, that drove these vintage menus to realized prices as high as $300. Each one is a small piece of the Detroit area as it was long ago, and these particular specimens were of museum quality.

Our resident hot fudge icecream-puff fan, Scott Lovejoy, points out that sixty percent of new restaurants fail in under a year, and that number rises to eighty percent five years out. If your family tried their hand at running a coney island joint for two years when you were young, those menus make for wonderful family mementos but probably won’t mean much to a wider audience. It is Sanders’ century of major success and local fame that makes its old menus a collector’s item. Notability is a major factor when it comes to value in an item like this.

Sanders walks a fine line. In its day, it was large enough that most everybody in the metro area knew its name. However, it was not large enough that its paper menus are widespread and easy to come by in condition. Most paper ephemera walks that line – if its too niche or too common, no one’s buying.

Does that sound like threading a needle? It is! You could make a full time job (or twelve) out of it. But luckily, you don’t have to – we’ve already done that. If you have a collection of paper ephemera, local memorabilia, or other museum-worthy items, we’re here to help you bring them to market. And if you’re sure you can handle it yourself, Hammer Drops is here every Wednesday to give you some tips.