The Silver Streak: A Non-DC Speedster 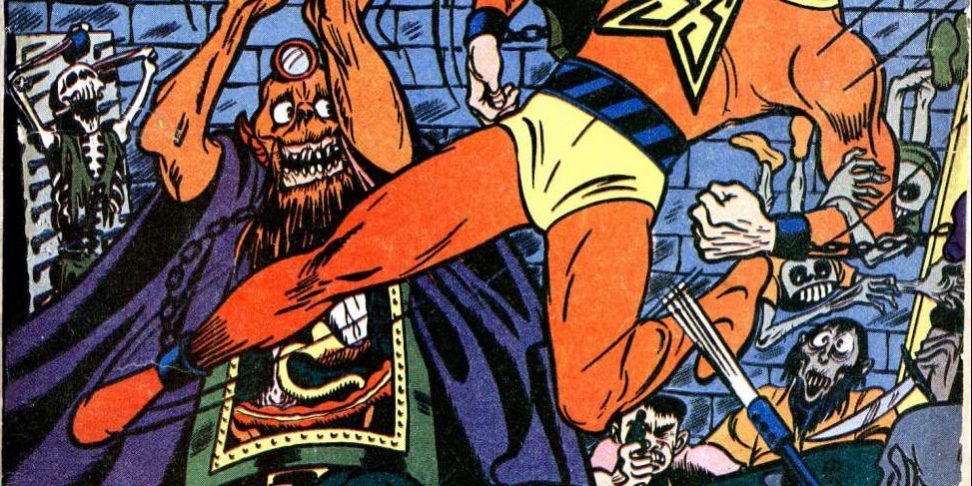 Welcome back to My Hero! Every Friday, we here at Back to the Past tell you why the obscure characters from our custom action figure collection are worth knowing. Years ago, we purchased the life’s work of an artist and comic fan whose chosen medium was granting forgotten comic characters the action figure immortality denied to them by major toymakers. We’re still sorting through it all, and we’re making new finds every week! This week’s pick, soon to appear on eBay, is Lev Gleason’s Silver Streak. 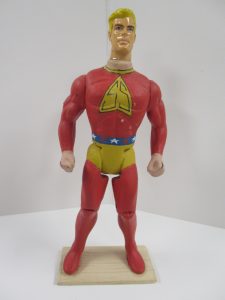 The Silver Streak as he appears in our Custom Figure Collection.

When Stan Lee ran out of superhero origin ideas, he invented the X-Men. When Golden Age writers ran out of ideas, it seems that they started playing Mad Libs. Per Silver Streak Comics #3, there once was a Swami who built and owned race cars. His favorite race car was “The Silver Streak”, and it seemed to be cursed: each time it took to the track, it was attacked by giant insects and the driver’s killed. This left him hard up for drivers, and so he hypnotized an unnamed taxi driver to handle the vehicle.

The cabbie was killed and the Swami, for reasons unexplained, resurrected him using a secret fluid that granted him superhuman speed. Naming himself for the car that got him killed, the cabbie donned a costume without a single swatch of silver in it and began battling crime. Over time, his blood would be transfused into both a falcon named Whiz (who gained human speech abilities in addition to speed) and a little boy alternately called Mercury and Meteor. Both would become Silver Streak’s sidekicks.

His most notable adventure was teaming up with other Lev Gleason heroes in a special one-shot to take on Adolf Hitler. It’s an all time classic comic cover, and a fun read. 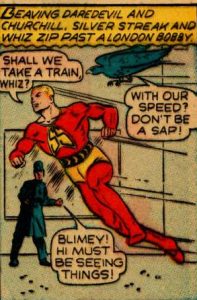 The Silver Streak and his falcon Whiz as they appeared in the Golden Age.

A Dearth of Classic Speedsters

Today, the super-speedster is one of the major superhero archetypes. Its a mainstay of super team creation. This wasn’t always the case, and it can be traced to the introduction of Barry Allen as The Flash in 1956’s Showcase #4. Prior to that, DC’s original Flash and his knock-off Johnny Quick were the most prominent speedsters in comics. The original Quicksilver was a fairly successful speedster for Quality Comics, and today he’s part of the DC Universe as Max Mercury. Pickings become increasingly slim the further away from DC Comics you get.

The major exception, of course, is The Silver Streak. He and his sidekicks represent super speedster characters with real Golden Age history that, being in the public domain, is available to anybody who cares to use them. They’re fun if you want somebody with The Flash’s powers who isn’t an obvious pastiche of The Fastest Man Alive. Silver Streak has showed up in Dynamite Entertainment’s Project Superpowers universe and, alongside Lev Gleason’s Daredevil, in the pages of Savage Dragon.

There’s some cool stuff around if you want to read his adventures, but if you want him on your shelf you need our custom figure collection. If you’ve got a collection like it – be that original art, custom action figures, convention sketches, whatever – and are looking to sell it, get in touch!