What is She-Hulk’s 1st Appearance? 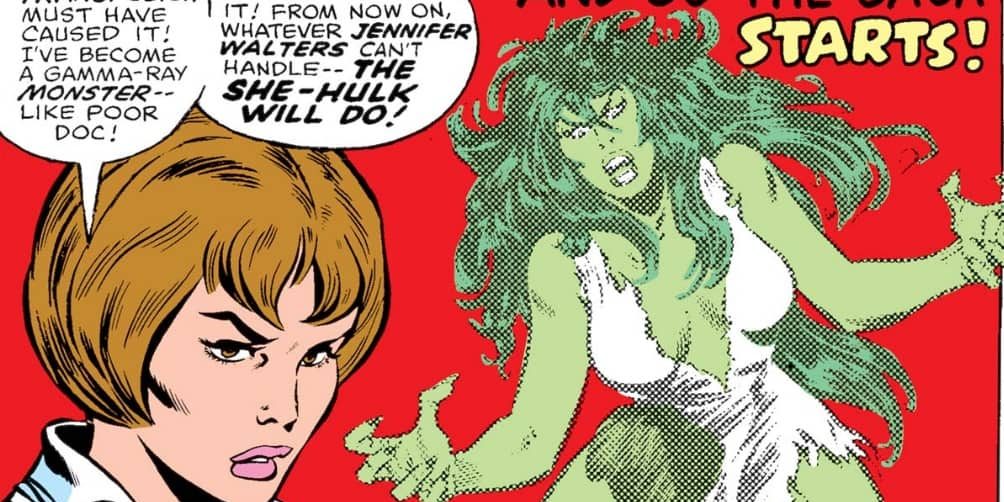 Welcome back to Consigned, Cool, & Collected! Every Monday, Back to the Past stops to enjoy one of the collectible wonders that has recently come through our doors. Today’s subject is a comic book that will be coming to auction as part of a larger collection May 19-21. Despite being forty-two years old, it was recently graded at a 9.6/10 by the good folks at CGC. It is a high-end copy of a book that’s become increasingly key in recent years, Savage She-Hulk #1. 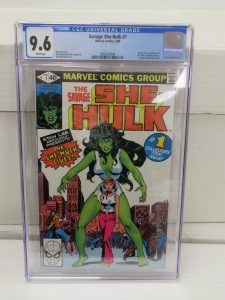 By November of 1979, The Incredible Hulk was a certified multi-media juggernaut. The TV series, airing on ABC, was in its third season and the comic had seen a jump in popularity as a result. This led to TV movies for Doctor Strange and Captain America, though neither would lead to a weekly series like Hulk’s pilot movie had. Even so, Marvel’s execs were getting nervous.

See, the previous king of sci-fi action television had been The Six Million Dollar Man. It aired from 1973 to 1978, and round about the third season, a spin-off was created. That was The Bionic Woman, which itself lasted a respectable three seasons and had only just ended. Marvel was concerned that the show’s producers might create a She-Hulk for spin-off purposes. At best, that would create a thorny ownership situation for Marvel using the character in comics and at worst they could be largely cut out of the profits from such a spin-off. Luckily, there was a simple solution.

The Bold Return of Stan Lee

Pop quiz: how long did Stan Lee write comics for? Thirty-three years. Well, regularly at least. He started at Timely Comics in 1939 and stepped away from the day-to-day work of writing in 1972. That didn’t end his association with Marvel, but it certainly changed his focus. Thus, it is worth noting that he is the co-creator of She-Hulk with artist John Buscema.

See, the position he stepped away from writing to take was publisher. He was one of the execs nervous that Hollywood would try to screw Marvel over! So, he was the one to do something about it. That was a no-brainer for Marvel. Savage She-Hulk #1, the last major Marvel title co-created by Stan Lee, hit newsstands on November 13, 1979. 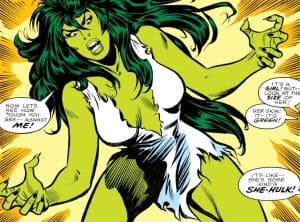 She-Hulk is Jennifer Walters, cousin and childhood companion of Dr. Bruce Banner. She’s grown into a capable defense attorney in Los Angeles, and Bruce goes to see her about maybe getting help with his status as a perpetually hunted fugitive. He calls on her office and spills his guts to her about just how out of control his life has gotten in recent years.

Jen is, naturally, gobsmacked to find out her cousin is the Incredible Hulk but is game to help him. Unfortunately, she’s already tied up in a mob case. A hood named Monkton is accused of murdering the bodyguard of mob boss Nick Trask. Monkton’s no saint, but Jen thinks he’s being framed and has leaked a false rumor that she has incontrovertible evidence of this. As she walks Bruce into her home, Trask’s gunmen ambush the pair and shoot Jen. Bruce manages to run them off without turning into the Hulk and struggles to stay calm enough to rescue her.

She-Hulk minutes after her first transformation.

Noticing a doctor’s shingle hung on a house across the street, Bruce breaks in and finds the place deserted. Knowing his cousin is losing blood fast and that they share the same blood type, he carries out an emergency transfusion directly from his veins to hers. She regains consciousness and her pulse strengthens, prompting Bruce to summon the authorities and split. He is a fugitive after all, and the police have questions he just cannot answer.

The following day, Trask’s men make a second attempt on her life in the hospital. Unfortunately for them, Cousin Brucie’s blood did more than just save her life. She morphs into a female version of the Hulk and makes short work of the mob triggermen. Luckily, the She-Hulk is more intelligent than the original and she terrifies them into a confession in front of the police. She retreats into the hospital as she returns to her human form, acting as if Jen Walters had taken shelter in an empty room when She-Hulk showed up. Her secret is safe, and the Marvel Universe had a new hero.

Know When to Grade ‘Em

Obviously, lots and lots of people know that She-Hulk is poised for big things. Her Marvel Studios series was announced for Disney+ a couple of years back, and it will debut around late summer or early fall. While Savage She-Hulk #1 has always been a key issue, it has exploded value in the last few years. 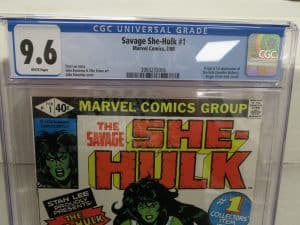 We really are so pleased with this 9.6 grade.

But this one? This one is an exceptional specimen. The late Bronze Age was still fairly early in the development of the collector market, and it is still a lil tough to find high grade specimens from that era. That this one landed a 9.6 is incredible and sure to help drive the realized price far beyond what an ungraded copy would fetch. Knowing when a book is worth sending into grade is a skill, one that we’ve been developing since CGC opened its doors. Making like the owner of this comic and consigning your collection, whatever it may be, through us to let our skills work you is almost as much a no-brainer as Marvel creating a She-Hulk. As is coming back every Monday to check out another item that is Consigned, Cool, & Collected.