Who are Mr. Scarlet and Pinky, The Whiz Kid? 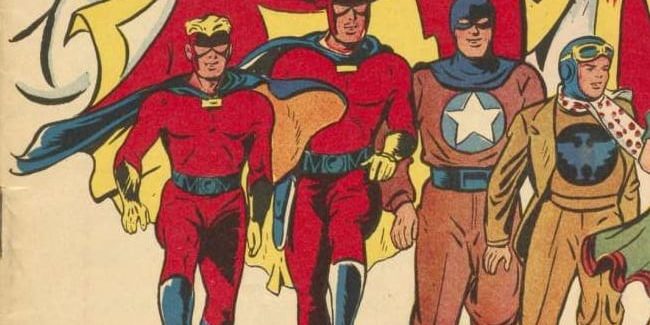 Welcome back to My Hero! Each week, Back to the Past uses this column to tell you why the obscure characters from our custom action figure collection are great! Years ago, we purchased the life’s work of an artist and comic fan whose chosen medium was granting forgotten comic characters the action figure immortality denied to them by major toymakers. We’re still sorting through it all, and we’re making new finds every week! This week’s find, who will soon be available on ebay,is the dynamic duo of Mr. Scarlet & Pinky! 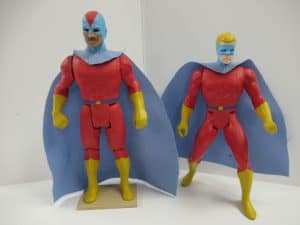 Mr. Scarlet & Pinky as they appear in our Custom Action Figure Collection.

By late fall of 1940, Fawcett Comics was already riding high with their answer to Superman, the original Captain Marvel (the one who says “Shazam”), in the pages of Whiz Comics. It was time for their answer to Batman. Enter Wow Comics #1, headlined by the caped crusader known as Mr. Scarlet! By day, Brian Butler is a district attorney who fights in court to put crooks behind bars. By night, he takes up the cowl of Mr. Scarlet and fights in the streets to bring criminals to justice without those namby-pamby 40s-era police procedures. Armed with only his athletic prowess and utility belt of gadgets, Mr. Scarlet battled the forces of crime and corruption!

Wow Comics was a quarterly series and its fourth issue, one year after Mr. Scarlet’s debut, gave the hero his kid sidekick. Pinky Butler is an orphan boy taken in by his city’s kind-hearted D.A. When he discovers his new dad’s dual identity, he decides to join him in his twilight crusade against crime. Thus, Pinky the Whiz Kid was born! Say what you will about Dick “Robin” Grayson’s shorts, at least he didn’t give crooks his real name.

Not As Successful As Batman 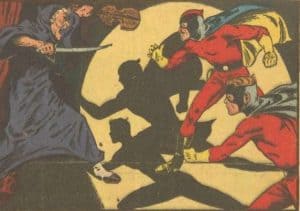 Mr. Scarlet and Pinky in their final Golden Age suits!

Mr. Scarlet was decently successful, appearing in Wow Comics until it ditched superheroes all together in 1948. However, he pretty quickly lost his headlining spot. First to the war-themed Commando Yank, then to Captain Marvel’s sister Mary Marvel. He would still pull cover appearances every now and then right up to the end, but very rarely as the full focus.

Like all of Fawcett’s heroes outside the Marvel Family, Mr. Scarlet faded into obscurity as the Golden Age moved away from superheroes. He was bought up by DC Comics alongside the rest of Fawcett’s catalog, but the company really only cared about the Marvel Family – at least at first. That started to change with Justice League of America #135-137. Those issues were 1976’s annual team-up between DC’s Golden Age heroes the Justice Society of America and their Silver Age successors in the JLA. Writers Martin Pasko and E. Nelson Bridwell, who worked on DC’s revival of Captain Marvel in Shazam!, worked in the heroes of Fawcett’s Earth-S. Thus did the likes of Ibis The Invincible, Bulletman & Bulletgirl, Spy-Smasher, and Mr. Scarlet & Pinky return to comic pages for the first time in decades!

The new team was dubbed “The Squadron of Justice” and, while not exactly warranting regular appearances, it kept the Golden Age Fawcett heroes in the mix. Even so, Mr. Scarlet still isn’t a big name: Spy-Smasher’s frankly a more fascinating gadget user. That said, neither of them have proven themselves toy fodder over the years. So fans of the Squadron of Justice will need to turn to our custom figure collection if they want to put Mr. Scarlet and Pinky the Whiz Kid on their shelf. And if you’ve got collection like ours, be it custom figures, original art, garage kits, convention sketches, whatever – and are looking to sell it, get in touch!