Who is Man o’ Metal? 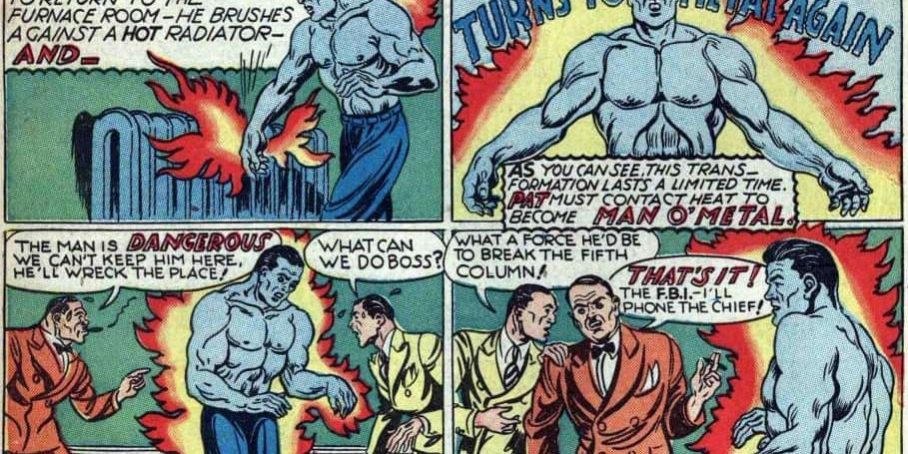 Welcome back to My Hero! Each week, Back to the Past uses this column to tell you why the obscure characters from our custom action figure collection are great! Years ago, we purchased the life’s work of an artist and comic fan whose chosen medium was granting forgotten comic characters the action figure immortality denied to them by major toymakers. We’re still sorting through it all, and we’re making new finds every week! This week’s find, who will soon be available on eBay,is Man o’ Metal! 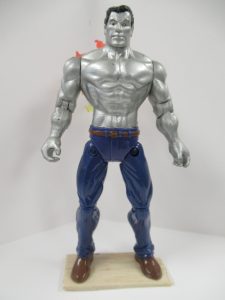 Man o’ Metal as he appears in our custom action figure collection!

Man o’ Metal made his first appearance in 1941’s Reg’lar Fellers Heroic Comics #7. Regular fella Pat Dempsey worked stoking the fires of blast furnaces in a foundry, which sounds like punishing work. In keeping with Heroic Comics’ commitment to bringing you the best in unsettling imagery, Pat was one day doused in molten steel when a bucket collided with a girder and tipped. Rather than be burned to ash, Pat instead gains metal skin that is perpetually burning.

Pat heads to the boss’s office to report this bizarre accident, but returns to normal upon entering. The boss upbraids him for his silly trick stunt and tosses him out. On his way out, Pat’s hand brushes the radiator and he immediately bursts in flame once again, complete with metal skin. The boss decides Pat is now a workplace hazard and needs to be fired, but refers him to the FBI for use as an agent. Nothing is said about the apparently white-hot radiator. 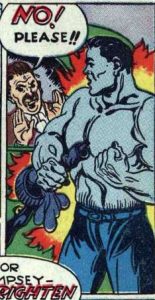 Man o’ Metal in his 1st appearance! Honestly, “burning metal skin” is a hat on a hat situation…

Dempsey would go on to be The Man o’ Metal, shirtless crusader against Axis spies! Since bullets, grenades, bombs, and electric shocks can all ignite him and activate his metal skin, he’s pretty well invulnerable. His flames almost always destroy his shirts and jackets but, like the Incredible Hulk, his pants remain intact for modesty’s sake. Actually, his pants are even hardier than The Hulk’s, since they remain fully intact and neat even as they are engulfed in flame.

While his powers (thankfully) don’t remain active very long at any given time, Man o’ Metal had staying power. He was a leading feature in Heroic Comics until superheroes were phased out of the title. Despite being a neat combo of The Human Torch and Colossus, he hasn’t proven popular with titles using public domain heroes. If his body-horror origin and powers pique your interest and you want an action figure of the character, you need our custom action figure collection. And if you’ve got collection like our custom figures, be it more customs, original art, garage kits, convention sketches, whatever – and are looking to sell it, get in touch!