Who is Marvel’s Moondragon? 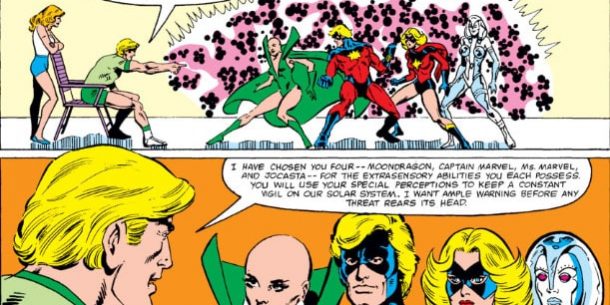 Welcome back to My Hero! Each week, Back to the Past uses this column to tell you why the obscure characters from our custom action figure collection are great! Years ago, we purchased the life’s work of an artist and comic fan whose chosen medium was granting forgotten comic characters the action figure immortality denied to them by major toymakers. We’re still sorting through it all, and we’re making new finds every week! This week’s find, who will soon be available on eBay, is Moondragon! 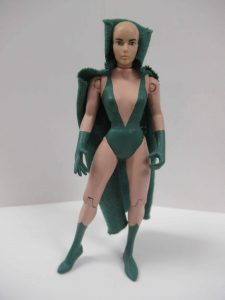 Moondragon as she appears in our custom action figure collection!

Iron Man #54 introduced a brand new evil mastermind to the Marvel Universe! A futuristic submarine in the north Atlantic launches an advanced spy satellite into Earth’s orbit. The sub is crewed by one woman, the bald-headed and scantily clad Madame MacEvil, and her crew of robots. MacEvil is so cold that even her robots think she’s soulless, and she’s go an experiment in mind. She fires a torpedo to endanger a passenger liner, prompting Namor The Sub-Mariner to intervene and rescue the innocent passengers. MacEvil then turns her satellite’s electronic eyes to Stark Industries. She uses her technology to remotely control Iron Man’s armor and pit him against Namor, hoping to capture the King of Atlantis for herself. Iron Man is able to manipulate the fight so that he and Namor damage the submarine and free his armor from MacEvil control. MacEvil flees, vowing revenge.

The very next issue would introduce Drax The Destroyer and Thanos in a one-off story by Jim Starlin. It’s worth noting, however, that Starlin had nothing to do with this ish. It was, by all appearances, just one-off tale with a mysterious (and cheesy) villain.

Madame MacEvil made her second appearing in Daredevil #105 about a year later, with a new writer taking her over. MacEvil reveals herself as the mastermind behind three new foes that DD has lately battled. Despite the alias she’s using on Earth, she imperiously insists to Daredevil that he’s the bad guy here. Madame MacEvil was born on Earth, but her parents were killed by aliens visiting Earth. Regretting this, they take in the young girl and raise her in their ways on Saturn’s moon, Titan. The girl was raised by the Priests of Shao-Lom,  developing scientific prowess and physic abilities as the priestess Moondragon. Her life among the Titans was idyllic until one of their own, Thanos, betrayed them and destroyed their civilization. 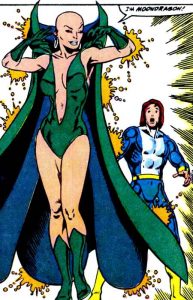 Moondragon as she appears in the comics. Her skimpy outfit would grow and shrink in its coverage depending on the artist, but this was the basic look for 20ish years.

Moondragon survived this cowardly attack and tracked him back to the planet of her birth. Knowing that Thanos has recruited agents amongst humanity, she has begun seeking out allies and creating superhuman agents as Madame MacEvil. Unfortunately, she’s been led astray by San Francisco attorney and crimelord Kerwin Broderick. Broderick manipulated her into creating supervillains to serve him, attempting to dispose of her. Daredevil and his then partner, Black Widow, fighting off Kerwin and Moondragon’s creations.

Madame MacEvil was officially renamed Moondragon, given heroic (if not nice) motivations, and integrated into the Thanos War plot being built in the pages of Captain Marvel. Jim Starlin himself expanded on her origins in Captain Marvel #32, where he revealed she was the daughter of Drax The Destroyer. Thanos’ father, Mentor, raised Moondragon and resurrected Drax to use as weapons against his wicked son. Her participation in the Thanos War brought her into contact with The Avengers, whose ranks she joined shortly thereafter.

But boy howdy, Moondragon never got nicer. To this day, her defining personality traits are her lack of empathy and her imperious nature. She’s been an Avenger, a Defender, a Guardian of the Galaxy, and guarded an Infinity Stone as one of The Infinity Watch but she remains the teammate (almost) nobody likes! She’s one of Marvel’s great cosmic powerhouses, which makes it strange that Toy Biz and Hasbro alike have completely missed her for action figure adaptation.

Which is why you need this custom action figure of her! Toy Biz made figures of her Infinity Watch teammates Adam Warlock, Pip The Troll, and Drax The Destroyer in their Silver Surfer line…but no Moondragon! Our customizer used a Toy Biz Scarlet Witch body with the head of Star Trek: The Motion Picture’s bald lady psychic Ilia to create this figure, meaning she fits in perfectly.