Who is Miss Masque? 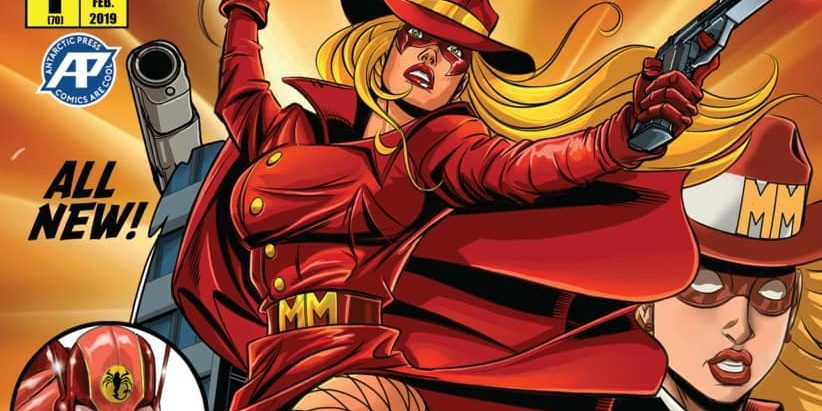 Welcome back to My Hero! Each week, Back to the Past uses this column to tell you why the obscure characters from our custom action figure collection are great! Years ago, we purchased the life’s work of an artist and comic fan whose chosen medium was granting forgotten comic characters the action figure immortality denied to them by major toymakers. We’re still sorting through it all, and we’re making new finds every week! This week’s find, who will soon be available on ebay, is Miss Masque! 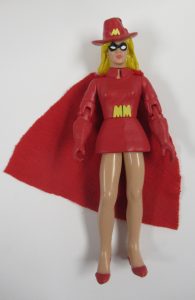 Miss Masque as she appears in our Custom Action Figure collection.

Miss Masque debuted in the pages of Exciting Comics #51, after the end of World War II. Socialite Diana Adams doesn’t really have much of a secret origin. She’s not a cop or a spy, none of her loved ones were killed, she just doesn’t much like crime. Donning a bright red costume akin to that of The Shadow, she battled street crime with her wits, fists, and a pair of pistols.

Miss Masque stayed with Exciting Comics until it ended only three issues after her debut. She then moved to the quarterly America’s Best Comics with issue #23. She gained a new costume, a pin-up inspired number with a bare midriff. She would remain cover girl and a leading feature in the title until is was cancelled with #31 in 1949. her feature also graced the pages of Black Terror and Fighting Yank during this time, bringing her total Golden Age appearance count to fifteen stories. She was relatively prominent at Nedor Comics during her short original run, but she was definitely their Johnny Come Lately. 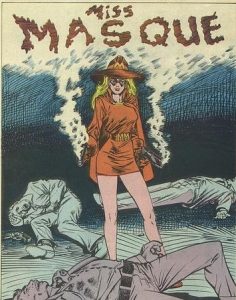 To the surprise of no one, this pin-up influenced public domain super-heroine was incorporated in AC Comics’ FemForce universe. What is surprising is that she didn’t debut until issue #30 in 1990. AC Comics made up for that late adoption by incorporating her in to issues of the AC Comics Pin-Up Portfolio and Good Girl Art Quarterly shortly thereafter. And, passing “surprising” and going straight into “shocking” territory, they based her look on her original, pulpier costume. Simply put, that’s not their traditional design aesthetic. 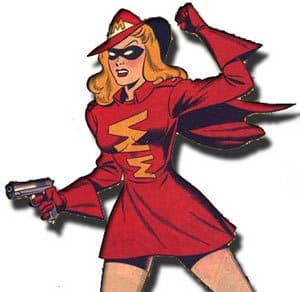 Miss Masque as she appeared in the Golden Age.

Miss Masque’s original golden age costume is notable for its odd logo placement. Two giant Ms were place on her chest and stomach, with a smaller M on the band of her hat. Effectively, this left her with a chest symbol that looked like two vertically stacked threes (or maybe Es). AC Comics, so far as we can tell, was the first company to do away with these and replace them with Ms on her belt buckle. This redesign has carried over to her appearances in comics published by Antarctic Press and Dynamite Entertainment (who rename her “Masquerade”).

Its a rare thing that a Golden Age character’s look would be so definitively altered by a 1990s redesign. Miss Masque, like all the Nedor Heroes, has proven fairly popular as Public Domain Superheroes go. Even so, she won’t be appearing on your shelf unless you pick her up from our Custom Action Figure Collection. And if you’ve got collection like ours– be it custom figures, original art, garage kits, convention sketches, whatever – and are looking to sell it, get in touch!