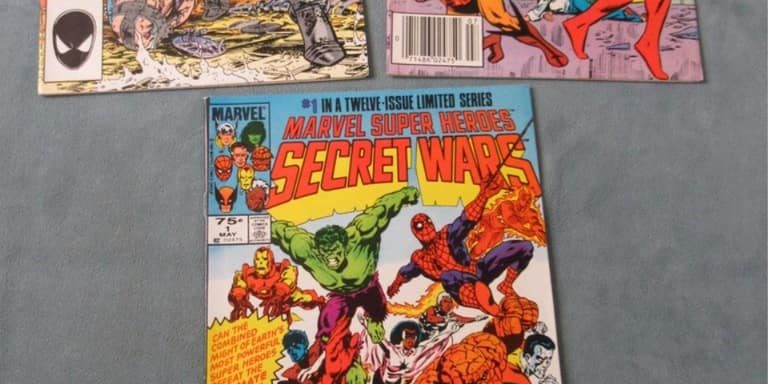 Welcome back to Consigned, Cool, & Collected! Every Monday, Back to the Past pauses its good works to appreciate the nifty stuff that we handle every day. This week is no different, except that we’re looking at something that’s more of a franchise than one specific item. Inspired by the action figures, comics, and coloring/activity books that we recently had at auction, we’re looking at Marvel Super Heroes Secret Wars. 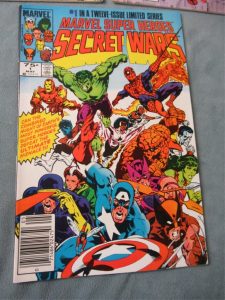 Marvel Does What DC Won’t

The story goes that in the early 80s, Mattel approached DC Comics about licensing their characters for a toyline. Mattel was already having a major success with its Masters of the Universe line and wanted a smaller figure line to capture the parts of the action figure market that He-Man didn’t. Since DC was already working with Mattel on He-Man comics, their characters were a natural fit. But this was around 1982, shortly after the first two Superman movies and while Super Friends was still going strong on Saturday mornings. DC took he stance that they didn’t play second fiddle to anybody, not even the strongest man in the universe, so they went over to Kenner for a better deal. The result was the Super Powers Collection, an iconic toyline of the 80s in its own right.

That left Mattel still in need of superheroes. They went to DC’s competition, Marvel Comics, who until then hadn’t been a major player in the toy market. The company, which was making major moves geared at multimedia dominance, was happy to get their foot in the door of the action figure market. The only hitch was that Marvel’s characters did not have quite the same level of mainstream notoriety as the Super Friends. A condition of the deal was that Marvel create a major comic book event to tie-in with the toys.

From Cosmic Champions to Secret Wars 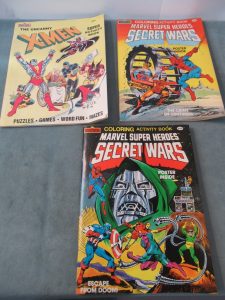 Jim Shooter, Marvel’s Editor-In-Chief at the time, knew that fans – particularly the young ones who are the target market for toymakers – often requested a story where “All the good guys and all the bad guys fight”. That was what he proposed to Mattel, who liked the idea. It allowed for the broadest spectrum of Marvel characters with one, simple uniting theme, exactly what they needed.

The original working title of the series was “Cosmic Champions”, and it was announced in Marvel Age #11 as such. This tied it to their previous event mini-series, the company’s first, Contest of Champions. However, Mattel’s market research discovered that words like “secret” and “wars” did well with their intended audience. Since the name “Secret Wars” describe the proposed plot just fine, it was adopted.

The twelve-issue mini-series debuted in May 1984, with the toyline launching around the same time. The first wave of figures included four heroes (Captain America, Spider-Man, Wolverine, and Iron Man) and four villains (Dr. Doom, Kang, Magneto, and Dr. Octopus). There were also playsets, vehicles, and a plethora of licensed merchandise. This includes the two coloring and activity books seen recently at our auction.

Unfortunately, the toys didn’t sell particularly well. The second wave was cut to just five figures, one of which was a repaint of Spider-Man in his new black costume. Three more figures were released strictly overseas, and the line ended right around the time the twelve issue mini-series did. Marvel wouldn’t become a titan of the toy industry until its partnership with Toy Biz began years later. 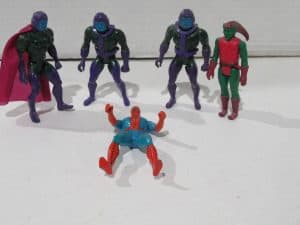 Three Kangs and a Spider-Man front the Secret Wars line.

But holy crap was the comic ever influential. Spider-Man’s black costume, an idea that Marvel had earlier bought from a fan, was embraced by Mattel since it let them release the same toy twice. That laid the seeds for the creation of Venom! Mattel wanted more female characters. This lead to a new Spider-Woman who went on to become a fan-favorite Avengers in the late 80s and early 90s. She even appeared as Iron Man’s love interest in his 1994 TV series. Another, the villainess Titania, is coming soon to the Marvel Cinematic Universe. While not strictly at Mattel’s behest, the series ended with The Thing choosing to stay on Battleworld. She-Hulk took his place on the Fantastic Four, beginning a fan-favorite era.

NOTHING Will Ever Be The Same!

Which doesn’t even get into how it changed the economics of the industry. Secret Wars and DC’s Crisis On infinite Earths came out basically back to back in 1984 and 1985. The both sold like gangbusters, cementing the idea of the event crossover as major sales driver for the big two. For good or ill, both companies have frequently had sprawling events with major plot fallout once or more a year ever since.

Marvel Super Heroes Secret Wars is fascinating for a lot of reasons. Its a case of Marvel playing second banana to DC, it’s a case of a largely unsuccessful licensing effort, and it’s one of the most iconic Marvel books of the 80s. The concept has been adapted into multiple cartoons and video games, because it remains a perfect reason to get a wide spectrum of Marvel characters into one setting. Even if it didn’t do exactly what Marvel and Mattel wanted it to back in the day, it has payed dividends ever since.

And all of it has accrued in value pretty well! Condition is key in such matters, and nothing tops Secret Wars #8 telling the origin of Spidey’s black suit, but the comics and the toys and tie-ins are pretty much all worth at least some money. If you have a Secret Wars collection, no matter what kind, that you’re ready to part with, we want to help you with it! And if you’re content to just keep reading up on pop culture history, come back every Wednesday for more info in Consigned, Cool, & Collected.