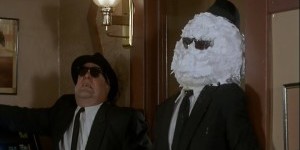 Welcome back to 1 out of 5 – Would Recommend, where we can find something to like about darn near anything. To that end, we’re talking about the awesome musical experience (and awful film) hailing from nineteen-hundred and ninety-eight, Blues Brothers 2000.

18 years after the events of The Blues Brothers, Elwood J. Blues is released from prison and finds he has no brother, no band, and no prospects. However, with a little trust in the Lord, he finds himself some new brothers, gets the band back together again, and finds a purpose in life. 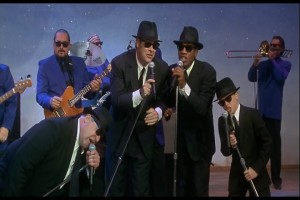 The same people who made the original, less the late John Belushi. Dan Aykroyd wrote it, John Landis, Robert K. Weiss (to quote the movie, “Who the hell is Robert K. Weiss?”) produced it, etc. The problem is just that –for whatever reason, be it studio interference, the lack of John Belushi, or Dan Aykroyd’s ever increasing but still lovable “crazy uncle” nature – the magic just wasn’t there anymore.

This movie is incredibly strange. For the most part, it feels like an attempt at a family friendly Blues Brothers movie – Elwood gains a plucky kid sidekick, the Bluesmobile can be driven both by remote and underwater, a friendly magic user turns the bad guys into mice, and everything’s generally “wackier” than the original. On the other hand, a solid chunk of the first act takes place in a strip club, the Russian mob is actively trying to murder the Blues Brothers, and their underwater sojurn ends with Elwood & Mack running afoul of conspiracy spouting, confederate flag waving, heavily armed anti-government militiamen.  It’s incredibly uneven and not very good…but it seems like Dan Aykroyd knew that and made up for it by cramming every note of music he could into the movie. The performances keep coming almost until the final credits role, and they make the movie worth a look. 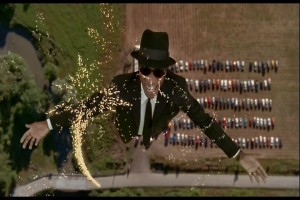 This is an Illinois State Trooper being magically lifted 1000 feet in the air and transformed into a Blues Brother by the power of God. He’s later turned into a zombie by a voodoo witch. None of this is ever referenced as being odd.

NEXT WEEK: We’re reminded that even our heroes have flaws as we watch 2008’s Meet Dave, the one and only major screenwriting credit of RiffTrax’s Bill Corbett.