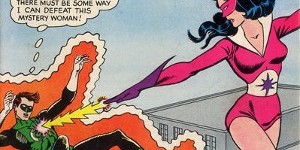 Welcome back to a new RETRO REVIEW.  This week it’s time to take a look at a comic from the DC Comics line of comic books.  Therefore, I’ve dug through some of my early favorites and come out with Green Lantern # 16, cover dated; October 1962.  And why is this one of my favorite issues?  Well, I guess foremost, it’s because this issue introduces the villainess; Star Sapphire, that’s why!  It features a nice cover pencilled by Gil Kane and inked by Murphy Anderson, so that sure doesn’t hurt.  Take a look, why don’t you: 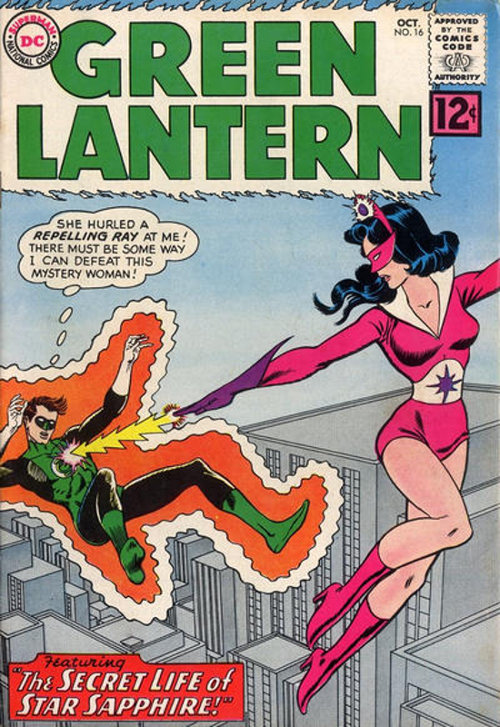 Once you get past the cover, you’ll find that this issue features two stories.  The first is the one that is cover featured, and it is entitled; “The Secret Life of Star Sapphire”.  It runs for fifteen (15) pages and it is written by John Broome and the art team is Gil Kane on pencils and Joe Giella on inks.

The story begins with Carol Ferris, Hal Jordan’s boss at Ferris Aircraft, while her father is away.  She is flying one of the company planes and thinking about Hal, but deciding she can’t marry him because of her feelings for Green Lantern.  Yes, I know, pretty typical plot in a Silver Age comic.  The girl always falls for the costumed hero and not the man beneath the mask!

During her flight, she loses control of her plane and is forced to make an unscheduled landing.  Upon impact, she is knocked out.  When she awakens, she is in the presence of two armored women.  The women refer to Carol as “your Highness” and tells her that she is their Queen.  The explain that they are from the Planet Zamaron and have searched the Galaxy and have finally come to Earth to find their Queen.  The Zamorans are immortal, but their Queen is always mortal and must be an exact duplicate in appearance to the past Queens.  And it seems that the past Queens are the spitting i,age of Carol Ferris!

Carol tells the Zamorans that she can not leave Earth, due to her love for Green Lantern.  They in turn tell her, they are aware of Green Lantern, and he is far inferior to the least Zamoran and they will have their Queen prove it.  They garb Carol in the costume of Star Sapphire, the Queen and give her temporary powers in which to combat and defeat Green Lantern.  Wow, all that in the first six (6) pages.

They leave and put Carol back at her plane in the desert, where Green Lantern finds her, along with a Star Sapphire jewel.  Green Lantern returns Carol to her home and flies off with the jewel wondering if he’ll ever figure out the connection between Carol and the villainess, Star Sapphire.  A pretty good little story for 1962!

The second story in the book runs ten (10) pages and is entitled; “Earth’s First Green Lantern”.  It is written by Gardner Fox and the art is provided by Gil Kane (pencils) and Murphy Anderson (inks).  I don’t know for a fact, but I suspect a number of readers may have questioned why Abin Sur arrived on Earth in a spaceship, when clearly the Green Lanterns could fly through space using the rings.  As this story answers that very question, and at the same time, allows DC to retell Green Lantern’s origin.  So it was win – win back in the day and even gave the creative staff a chance to tell a story about another who answered to the name of Green Lantern.

That wraps up this week’s RETRO REVIEW, but I hope you return next week for a new Fabulous Find.  Til then … be seeing you.