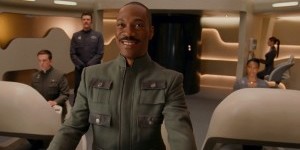 A space ship, shaped like regular sized Eddie Murphy and captained by a tiny Eddie Murphy, crash lands on Earth with a mission to save its homeworld. This mission is complicated when the ship falls in love with a human woman (and humanity in general). This is a real movie that exists. 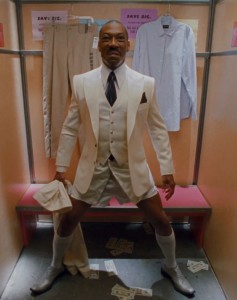 Pictured: A talent Eddie Murphy actually had in the 80’s.

The only name we care about is co-writer Bill Corbett, who is best known for his work on Mystery Science Theater 3000 and with RiffTrax. Usually we tackle movies mocked by the RiffTrax guys, today we focus on one made (kinda) by one of them.

It’s not exactly as bad as its reputation, which includes Bill Corbett’s opining that “Hollywood does tend to suckify things. Often quite badly.” The fact is that, while largely bland and forgettable, has just enough Corbett in it to give you some laughs. You can do much worse for your family movie night *coughcough* Surf Ninjas *coughcough*.

Far more strongly recommended is RiffTrax Live: Miami Connection, a great bad movie that will be spiced up with funny jokes, this Thursday night at 8 PM. Be there! I will! 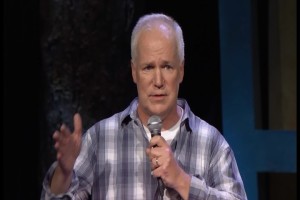 Pictured: A man usually much funnier than this movie indicates. And who used to be a robot.

NEXT WEEK: In honor of Halloween, October will be a month of horror. We’ll be kicking things off next week with 2001’s Jason X!  Rest of the month will include Retro Puppet Master, Leprechaun in the Hood, and Rocky Horror sequel Shock Treatment.