1 out of 5 – Would Recommend: Breakin’ 2: Electric Boogaloo 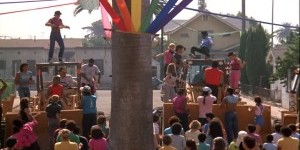 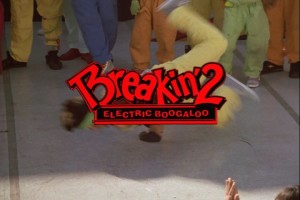 Welcome back to 1 out of 5 – Would Recommend, where we continue to pay tribute to the utter insanity that is the production work of Golan and Globus! This week, we investigate the movie with a title so ridiculous it’s still a meme thirty years later: 1985’s Breakin’ 2: Electric Boogaloo. 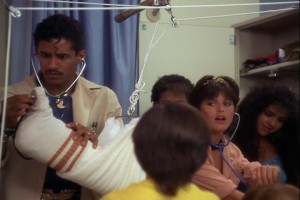 This moment makes precisely as much sense in context as it does here.

Yoram Globus & Menahem Golan produced this movie, a sequel to their 1984 hit Breakin’. Both movies rode a legitimate break dancing craze to some financial success, although this film didn’t make fifty percent of what the first did. What’s impressive is that the movies came out nine months apart, a mind bendingly short turnaround time for sequel. Fortunately, The Canon Group Inc. wasn’t known for letting such minor concerns as “well thought out plans” or “quality filmmaking techniques” get in the way of making a movie.

This movie is silly beyond silly, but is an entertaining bit of fluff. Its bad reputation is well earned and deeply deserved, but it’s fun to watch and doesn’t require your undivided attention, making it good for Saturday afternoon viewing. Plus, it’s the actual movie that launched the enduring “*Movie* 2: Electric Boogaloo” meme, a joke so iconic that the documentary about Golan & Globus borrowed the title – that’s reason enough alone to watch it.

One is forced to wonder at this point if Ice T knows he can say “no” to being in movies.

NEXT WEEK: Lou Ferrigno tries to make the sex and violence schlock peddlers do a family film in 1983’s Hercules.