Archie’s Fireball and his Winter Colors 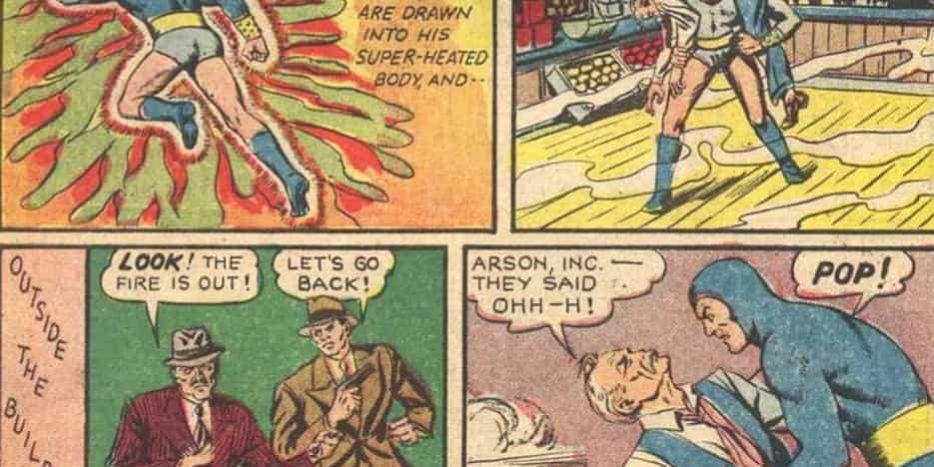 Welcome back to My Hero! Each week, Back to the Past uses this column to tell you why the obscure characters from our custom action figure collection are great! Years ago, we purchased the life’s work of an artist and comic fan whose chosen medium was granting forgotten comic characters the action figure immortality denied to them by major toymakers. We’re still sorting through it all, and we’re making new finds every week! This week’s find, who will soon be available on eBay is Archie Comics’ Fireball!

What Do We Mean “Winter Colors”?

If you’ve got any kind of fashion consciousness, you probably have a good idea what we mean. The short version is that “Summer” colors tend to be warm and vibrant while “Winter” colors tend to be cooler and muted. Generally speaking, fire-themed heroes are summers. Specifically, they tend to be decked out in reds and yellows – occasionally orange. Y’know, the most widely recognized colors of fire! 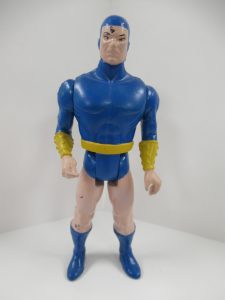 Archie Comics’ Fireball as he appears in our custom action figure collection!

Archie Comics’ own Inferno is a great example of the trend, but it’s very pervasive. The trend is evident with X-Men fremeny Pyro, Spider-Friend Firestar, Red Tornado’s lil brother Red Inferno, All-Star Squadron member Firebrand, the list is extensive. It goes all the way back to the debut of the original Human Torch in 1938! But Fireball, who debuted back in 1941’s Pep Comics #12, bucked the trend early.

Fireman Ted Tyler is one of the brave men fighting a blaze at the Aragon Chemical Company! Spotting a man still inside, Ted ascends the ladder and climbs though the window for a daring rescue. Unfortunately, the man is The Bug – a costumed arsonist who set the fire. Knocking Ted unconscious, The Bug ties him and leaves him to die in one of the labs. Fortunately for Ted, the fire causes the shelves to weaken and douse him in checmicals. Following the time-honored formula of Elements + Random Chemicals = Super Powers, Ted survives. Fireball is born!

Discovering he now has the ability to create and control fire, the fire chief sets Fireball up as a costumed arson investigator. That explains the color scheme – he’s a city official! To close out his origin story, he confronts The Bug a second time. Fireball quickly absorbs the criminal’s newly-set fire before proving immune to The Bug’s bullets (they melt) and fists (the burn). Fireball sets the crook’s cape on fire, prompting him to dive from the nearest window. Suffice to say, they were not on the first or even third floor. So ends his first adventure in suitably gruesome Golden Age fashion. 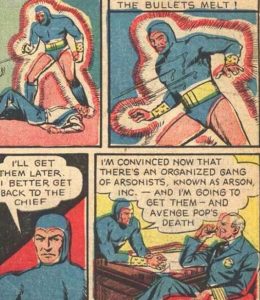 Fireball’s color scheme didn’t come together until his second appearance.

Where is Fireball Today?

Fireball is a bit of an odd duck in the Archie Super Hero canon. His feature made just ten appearances in Pep Comics, leaving him him in the also-ran category. However, he’s been relatively popular for cameos over the years! Most recently, he showed up alongside The Equalizer (neither Denzel Washington nor Edward Woodward) in a Super-Teens story earlier this summer. But even stranger, he’s been involved in two major revivals of the Mighty Crusaders! Or at least his legacies have.

Back in 1992, DC Comics licensed the Archie heroes for their Impact Comics imprint. About a year in, they were ready to expand their character line-up in order to team them up. The Fly #9 saw the debut of a revamped Fireball. This version was Josh Hawkins, empowered by extra dimensional energies with superhuman speed and the ability to toss around balls of fire. He helped found The Mighty Crusaders and stayed a key character until the line ended despite never getting his own title.

Twenty years later, Archie Comics themselves wen the legacy hero route with New Crusaders. Among their number was Alex Tyler, troubled nephew of the original Fireball and his successor after a super-villain attack killed the Mighty Crusaders. He was the sacrificial lion who died to establish that the New Crusaders actually had stakes, but his powers were adopted by teammate Fly-Girl to create a new Firefly.

Unfortunately, Fireball and his legacies have missed out on plastic immortality. The original didn’t even appear in the 80s Mighty Crusdaer comics, much less their toyline. DC Comics, and therefore their Impact Comics imprint, never really got in on the “everything gets a toy” craze of the mid-90s. And, unfortunately, The New Crusaders’ haven’t proven popular enough to wrangle an ongoing much less a toyline.

So if you’re an Archie Comics nut who needs Fireball on his shelf, you’re out of luck. Or you would be if it weren’t for our custom action figure collection! If you’ve got collection like our custom figures, be it more customs, original art, garage kits, convention sketches, whatever – and are looking to sell it, get in touch! or if you want a comment or quote on something we’ve written about, we’re always available! We can be found dang near everywhere as @b2pcollect.