I have a confession to make!  Yes, I am hooked on series characters.  Comics, of course, but also books!  I guess it stems from my elementary school days, when I read The Hardy Boys series, written under the house name of Franklin W. Dixon.  In 1959, the series underwent extensive revisions and were reissued in a new hardback series, and it was these revised editions that I read as fast as I could pick up the next one in the series!

I’m not sure how long it was before I discovered the paperback reprint series, by Bantam Books, featuring Doc Savage, but I think it was in late Junior High or early High School.

In October 1964, Bantam Books issued their first three reprints of the Doc Savage adventures from the old pulp magazines.  Doc Savage had been introduced to the American public in Doc Savage Magazine, i.e. pulp, in March of 1933, with the story entitled; The Man of Bronze.

Here is the cover to that first Doc Savage paperback book from Bantam: 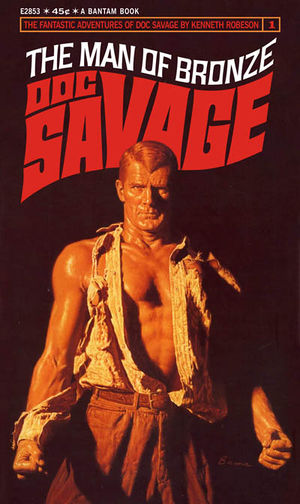 And a new hero was born.

The books were issued under the house name of Kenneth Robeson, but the actual man behind most of the Doc Savage stories was writer, Lester Dent and he did an excellent job keeping the series fresh and interesting!

Now jump forward to October 1964 and Bantam Books released three Doc novels, in a newly numbered series.  First was; The Man of Bronze, then The Thousand Headed Man, followed by Meteor Menace!  Then they sat back and waited to see if the books would sell.

Here is the second book in the series: 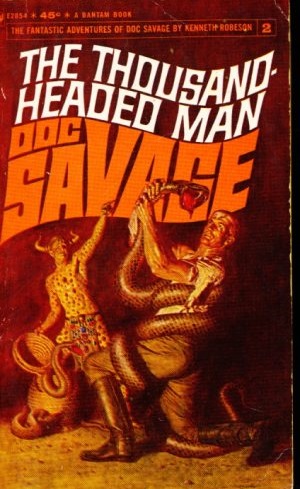 And finally the third in the initial releases: 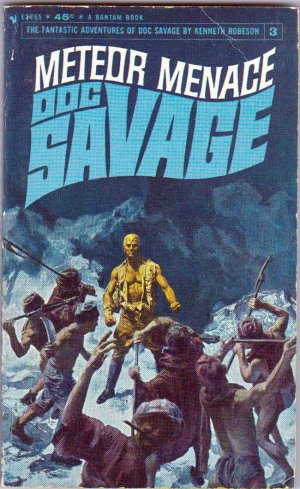 And sell they did.  The first two books featured wonderful iconic artwork by painter James Bama, the third cover was by Jim Aviati.  The books that followed the following year had covers by various artists until it was determined that the Bama covers sold the best and he became the defacto cover artist for most of the rest of the series!

April 1965, saw the release of three more Doc novels and then Bantam regularly released the novels at a pace of one, every other month, over the next ten years.

I bought as many as I could find on the newsstands, and read and enjoyed them all.  But it has only been over the last couple of years that I have completed by collection of the first ninety-six (96) Bantam novels.

Beginning in 1980, with book number 97/98, Bantam started reprinting the stories two to a book.  This lasted up through 125/126 in 1985.  I also was able to complete this run of books about a year ago.  I’ve read now though them these and still enjoyed them, but a couple written by other authors didn’t quite measure up to the Dent books.

Then in 1986, Bantam started publishing four (4) stories to a book in an Omnibus edition, with new numbering, beginning with number one (1).  This series ran through Omnibus number thirteen (13) and includes the final Doc Savage story; Up From Earth’s Center.  After much searching I managed to buy all of these, as well.  But I have not had a chance to read all of these to date.  But I will, have no fear!

So that should be it, right?  Nope, there were still some additional Doc Savage novels to be tracked down.  Eight of the to be exact, these further books also appeared under the Kenneth Robeson byline, with the exception of Escape From Loki which was written and published under Philip Jose Farmer’s name.  And yes, if you’re wondering I own these, as well.

And before you think you’ve got all the Doc Savage novels that have been written, I need to also point you to The New Adventures of Doc Savage from Will Murray.  I don’t own any of these, so I can’t yet tell you how they stack up against the originals, but once I get through the rest of the books I already own, but haven’t read yet, you can bet I’ll be tracking the new adventures down and adding them to my book shelves!

If you have never read a Doc Savage novel, give yourself a treat and pick up a Sanctum Books Double novel at your comic book shop or at the local bookstore, or check out a local used book store and see if they have any of the Bantam paperbacks.  Go ahead and tell them I sent you!  It won’t get you anything, but I’d like to know their reaction!

And please be sure to come back next week for a new RETRO REVIEW and I’ll be back in two weeks with another Fabulous Find.  Til then,   be seeing you …