What Makes Collectibles Worth Money? 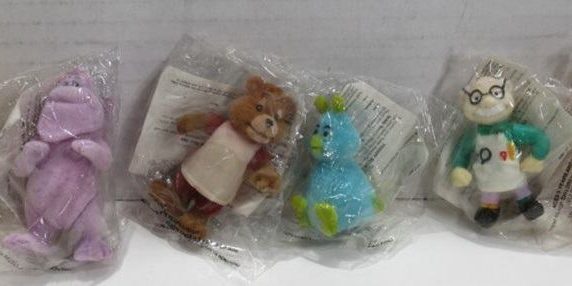 Welcome back to Hammer Drops! Each week, Back to the Past Collectibles shares its accumulated collectibles knowledge with you, the dedicated do-it-yourself seller. Because we always have great collections passing through our doors, we’ve always got great examples for our lessons. This week is no different! We’re looking at one item from our eBay store and one lot from a recent auction to see how disposability interacts with value. 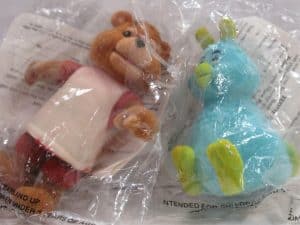 In 1987, the Wendy’s Kid’s Meal did a promotional tie-in with The Adventures of Teddy Ruxpin animated series. It featured five characters from the toy-based cartoon, including tiny and non-electronic version of the Teddy Ruxpin and Grubby toys that formed the basis of the series. It’s hard to say just how successful the tie-in was for moving hamburgers, but the show ran the standard 65 episodes and, oddly enough, one of the first American shows imported to Bulgaria. Its not the best remembered part of the Teddy Ruxpin legacy, but it is remembered.

So, how much are these 35 year old kiddy toys worth? Well, based on recent auction results, about $6.50 per figure when sealed in original bag. Which is by no means a bad price for fast food premiums, but still barely enough for a burger at Wendy’s. 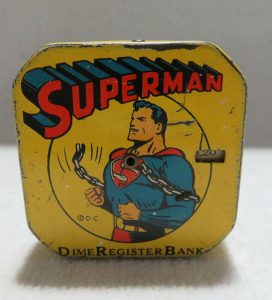 As we’ve discussed before, Superman was a near-instantaneous multimedia hit. Radio shows and theatrical animated shorts were all produced within only a few years of the character’s debut on the comics page, and the character was headlining four different comics before his tenth anniversary. And then, like now, that brought licensing opportunities.

We’ve already covered the Ideal Toys Superman doll, so today’s focus is a Superman Dime Register Bank. Its a small bank designed to hold up to fifty dimes, with a little counter that raises the amount each time a new dime is added. These were a fairly popular cheap novelty for kids back in the day, and its easy to see why: all the manufacturer had to do was design one bank and then slap different graphics on it. In addition to the Superman one we have, we’ve also got two Popeye dime banks in the showroom. They are priced at $40 (a well loved specimen) and $60 (a different design that’s in better shape). Superman, which we’d say is definitely showing its age but still looking great, is listed for $130.

The Changing Definition of “Disposable”

Now, obviously the Superman bank is over twice as old as the Teddy Ruxpin toys, but consider this: do you think that bank was selling on the collector market for under ten bucks back in the 80s? We don’t have a price guide that cover that era, but we would guess not. Both items are small, cheaply produced items meant for the hands of little children. They are meant to be played with, abused, and ultimately thrown away when the kid grows up. What’s the big difference? 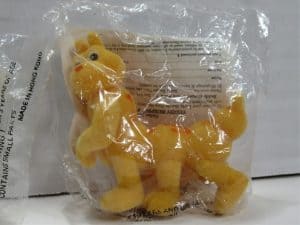 Well, the difference is collectors. By the 1987, there were people collecting and storing Happy Meal toys unopened. Fast food premiums were only about ten years old, but they were as good as what cereal premiums had been in the 50s. Plus, you didn’t need to buy five boxes of cereal to collect them all, just have lunch for a week. Nostalgiacs were on the prowl and, whether because they were speculators or just thought they were neat, they were keeping them looking nice.

In the 1940s, Superman was the equivalent of Paw Patrol. Heck, it basically invented the modern superhero. Moreover, mass-produced licensed items like these Dime Banks were a new phenomenon, and they almost exclusively appealed to children. There was no generation feeling nostalgia for them or for superheroes.They were purely kid’s stuff. Nostalgia then was for the simpler days before broadcasting and moving pictures, and there was no adult audience for the very new-fangled pop culture nostalgiacs were actively fleeing.

And that’s where value can hide. Take Pokemon cards for example. Trading Card Games were still a new thing when they debuted in the U.S., and Pokemon themselves were cutesy Japanimation video game things. The adult audience was small, mostly the first wave of young adults who refused to give up their video games and early fans of Japanese animation taking anything they could get. As such, those early cards can be worth hundreds of dollars or more since adults who knew how to treat their toys nicely came late to the party.

We brought up a similar point recently when discussing historical memorabilia. The fact of that matter is that the best long-term values have always come from items that weren’t originally collected for the sake of collection. That’s where luck and a good eye come into play, as collectibles are the very definition of “one person’s trash is another person’s treasure”. The trick on values is that it has to have been one person’s trash at some point or else the market is flooded with high quality specimens.

If you’ve got a house full of stuff and no idea how to pick out the diamonds in the rough, we feel for you. So much so that we recommend you give us a call to help you out, as we’ve the kind of good eye for your collection that makes you feel lucky when we’re through. And if you’re determined to go it alone, we’re still here for you every Wednesday with Hammer Drops.