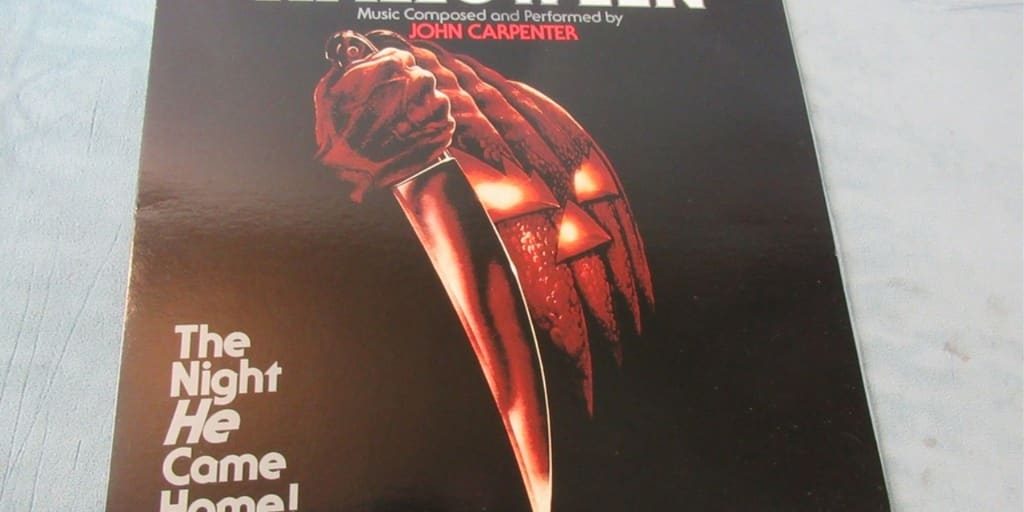 Our October 23rd auction session, which will happen LIVE in the showroom and online, is Halloween themed! It includes plenty of vintage vinyl records that will provide the perfect atmosphere for your Halloween shindigs the following weekend. For this week’s Consigned, Cool, and Collected, we’re spotlighting some of our favorites! 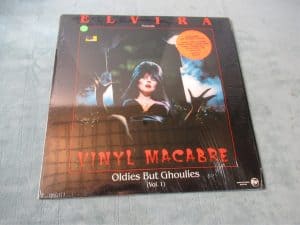 Elvira’s Movie Macabre debuted in 1981. By 1983, it was enough of a hit that its hostess, Elvira Mistress of the Dark, was a certified pop culture icon. This, Rhino Records teamed up with her to produce this album of Halloween party hits. It includes her show’s opening and closing themes to, well, open and close the record. In between, you’ve got old standbys like “The Monster Mash” and “Purple People Eater” alongside then-modern tunes like “Drac’s Back” by Red Lipstique and “Horror Movies” by The Bollock Brothers. Perhaps the most oddball thing on the record is the side one closer, “It’s Halloween” by The Shaggs. For the unhip, they’re a one-album band generally considered the Plan 9 From Outer Space of 60s garage rock.

This compilation is actually older now than some of the retro tunes on it were when it was originally pressed. Its selection of campy, cheese-ball songs lines up with the Elvira vibe, carefully cultivated by actress/creator Cassandra Peterson, very well. It will help keep a light but spooky vibe going on your Halloween festivities quite nicely.

In the early 70s, Richard O’Brien was a struggling theater actor pushing thirty. To fill his empty afternoons, he began writing a musical. Its aim was to parody the b-movie horror and sci-fi flicks that O’Brien was a fan of, easy fodder thanks to their overwrought dialogue and paper thin plots. He added to this a dose of 50s-inspired rock n’ roll, following the same retro vibe. What he hadn’t necessarily planned to include was a heaping helping of trangressive explorations of sexuality and gender, but it just sort of *ahem* came out as he developed it. He showed the book and music to director Jim Sharman, who suggested a title change before mounting it in the Royal Court Theatre’s upstairs stage on June 19, 1973. The Rocky Horror Show was born.

The show was an instant success and Hollywood quickly came calling.On August 15, 1975, 20th Century Fox opened the Rocky Horror Picture Show in theaters. Directed once more by Sharman, the film starred a mix of original stage cast carryovers (most notably Tim Curry as Dr. Frank N. Furter) and new actors (like Susan Sarandon as Janet Weiss).  It was not an instant hit, with legendary film critic Roger Ebert later saying it was “ignored by pretty much everyone, including the future fanatics who would eventually count the hundreds of times they’d seen it”.

In 1976, at the Waverly Theater in Greenwich Village, RHPS became the phenomenon it is today. Running weekly at midnight, a crew of regulars built up over the course of five months. They began shouting taunts the characters, interacting with the dialogue, and throwing things at each other in a what grew into a loose set of rituals. These traditions spread to art house theaters around the country, giving the movie a new life that continues to this day. Either album will give your party a sexy, silly, spooky vibe.

In the 1960s, college chums George Romero and John Russo decided they wanted to make a horror film. They developed a story about the dead rising to feast on the living together, Russo wrote the screenplay, and Romero directed the film. Night of the Living Dead was the end result, a film that changed the American concept of zombies forever. Russo and Romero parted ways, with Romero going on to direct several “of the Dead” films following up on the original film’s themes. Russo, retaining the right to “of the Living Dead”, ended up writing a direct sequel novel entitled Return of the Living Dead. 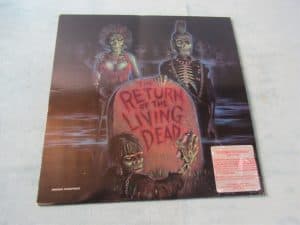 By the mid 80s, the book had been licensed for a movie. It was set with a script by writer/special effects wizard Dan O’Bannon (Dark Star, Alien) to be directed by legendary Texas Chainsaw Massacre director Tobe Hooper. Then Hooper dropped out, and O’Bannon was offered the director’s chair. He accepted on the condition he be allowed to rewrite the film to differentiate it from Romero’s films. His request was granted, and change it he did! The film became a punk rock horror comedy, complete with more satirical political themes and tougher ghouls. It is a cult classic in its own right.

Part of the reason for that is the soundtrack. It was filled to the brim with California punk acts like The Cramps, The Flesh Eaters, and The Damned, lending the film a hard and spooky edge. It can do the same for your Halloween gathering, if you’re the kind of person who wants their guests angry at society and ready to mosh.

And that’s just  a small taste of the vinyl, vintage and otherwise, coming up as part of that session! Music collectors will absolutely want to give this one a look. And if you’ve got a vinyl collection you’re looking to turn into a modern coins and currency collection, we here at Back to the Past would love to help you sell those records. We’ll get it into the hands of somebody who knows your stuff deserves to be Consigned, Cool, and Collected.