1 out of 5 – Would Recommend: The Shaggs 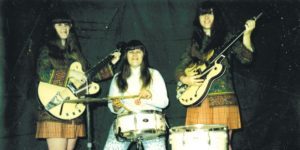 Welcome back to 1 out of 5 – Would Recommend, where I’m taking a page out of Greg’s book and talking about old school garage rock…in the form of The Shaggs’ one and only album, Philosophy of the World.

Who are The Shaggs?

Sisters Dot, Betty and Helen Wiggin officially formed The Shaggs as teenagers in 1968 and spent the next seven years gigging around their hometown of Fremont, N.H. They released their first/last official studio album, Philosophy of the World, in 1968. They would break up in 1975 following the death of their father/manager/producer Austin Wiggin, jr.

Prepare for a well of crazy that makes Tommy Wiseau look stable. Austin Wiggin, jr.’s mother read his palm when he was a young man and made three predictions for him:

We don’t know if that’s strictly true or the overall state of Austin’s mental health, but he saw the first two predictions come true and he swung for the fences trying to make the third happen. He yanked his three teenage daughters out of school and taught them how to play instruments and compose music (a real accomplishment for someone who didn’t know how to do that himself) and had them form The Shaggs.

To his credit, he got them ongoing gigs at the Fremont Town Hall and the local nursing home, as well as getting them down on wax. To his detriment, he pulled his teenage daughters out of school and forced them to become a band despite having no musical interest, aspirations, or aptitude to speak of.

Once he died, his daughters gave up the music biz and would never have looked back…except for that commercially released record they made. Actual rockstars like Frank Zappa, NRBQ, and Kurt Cobain have spoken highly of the record and legendary disc jockey Dr. Demento would work tracks from it into his shows – particularly the track “It’s Halloween”.

I’m skipping the standard five reasons for this one. Similar to films like The Room and Plan 9 From Outer Space, this record lacks any sort of technical skill or traditional measure of “goodness”. What it does have is an honesty, a genuine quality of earnestness that simply cannot be faked. If you get any enjoyment of outsider music like Legendary Stardust Cowboy, Wesley Willis, or Song Poems (advertised alongside x-ray specs in the comics of old), there’s something worth seeing here. If you can’t stand flicks like The Room or Plan 9, you’ll probably be left cold.

Category: TV & MoviesBy Chris WalkerDecember 18, 2018Leave a comment
Tags: 1 out of 51 Out of 5 Would RecommendLight in the Attic RecordsPhilosophy of the World