Were There Battlestar Galactica Comics? 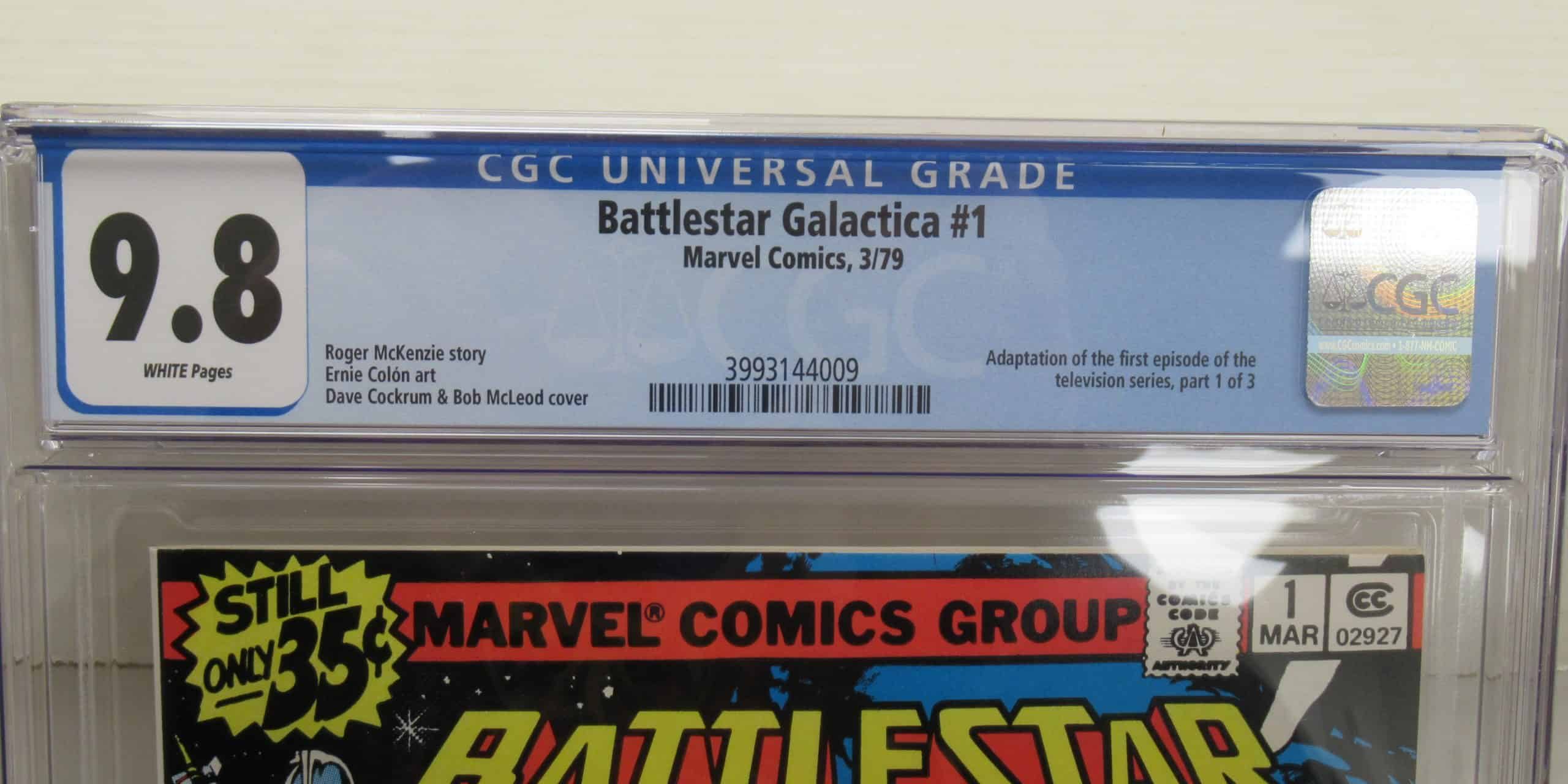 Welcome back to Consigned, Cool, & Collected! Every week, Back to the Past stops to give you a closer look at the cool stuff coming through our doors. Today, we’re sticking the gorgeous key issue collection we introduced you to last week. It comes to auction the weekend of May 21st, so until then we’re highlighting some of the cooler pieces to be found in it. This week’s subject is a CGC 9.8 copy of Battlestar Galactica #1 from 1978! 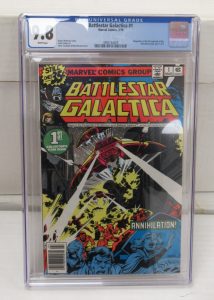 A CGC graded copy of Battlestar Galactica #1 coming to auction in May.

We’ve written about it before, but it always bears repeating: the runaway success of Star Wars in 1977 took the whole world by surprise. It cemented the big budget sci-fi epic as a cinematic staple, it popularized the modern action figure, and it left studios and toymakers scrambling to catch up. Projects like Flash Gordon, Buck Rogers in the 25th Century, Alien, The Black Hole, Star Trek: The Motion Picture, and many others followed directly in its footsteps. Often, they followed it right down to having a tie-in line of the then-new 3.75” scale action figures and vehicles. The one that followed it most directly was 1978’s Battlestar Galactica.

What set BSG apart from most other Star Wars imitators was its special effects team. Apogee, Inc. was founded by John Dykstra and several other special effects artists who had worked on the original Star Wars flick. They were hired to work on the eight-million-dollar TV movie that kicked off the Battlestar Galactica franchise, and their it showed. More than anyone else, BSG looked like Star Wars.

Too much like, according to 20th Century Fox and George Lucas.  The studio sued Universal Television, makers of BSG, for plagiarism while Lucas threatened Apogee with legal action over the special effects equipment used for the TV movie. Both were ultimately settled out of court, and Apogee ended up replaced by Universal Studios’ in-house effect people. Lucas was also felt that Battlestar Galactica toys could be mistaken for Kenner’s Star Wars toys and, due to dangerous projectiles the toys fired, get him bad publicity. While the projectiles did prove unacceptably dangerous to small children, all notable blame fell on BSG and Mattel. 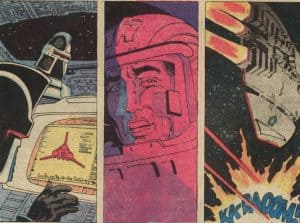 The comic’s version of Lt. Zac’s death. Fun fact: in the TV show, he was played by a pre-Jessie’s Girl Rick Springfield.

Apogee’s effects were so good that they stood the test of time. Their effects shots of spaceships were reused in 1988 by the schlocky B-movie Space Mutiny. Despite being a decade old by the time the new film was made, Apogee’s effects are the best-looking part of the film.

Quite possibly the only party with a business interest in Star Wars that was happy about Battlestar Galactica was Marvel Comics. Marvel’s comic adaptation of Star Wars hit newsstands on April 12, 1977, just under a month before the movie hit theaters. Their adaptation of Battlestar Galactica hit newsstands on December 12, 1978, just before the series began its mid-season break.

The first three issues adapted the pilot movie, which would be released to U.S. theaters in summer of 1979. After that was finished, it largely focused on telling original stories. It served as a sort-of unofficial sister series to Star Wars, despite the legal troubles between two franchise’s respective corporate parents. Together with toy-adaptation Mirconauts, they formed a little island of unconnected but thematically similar science fantasy space operas amidst Marvel’s ocean of superhero titles.

The comic book series managed to outlast both Battlestar Galactica, which ran just one season of 24 episodes, and its follow-up Galactica 1980, which ran ten episodes in early 1980, though not by much. The comic book ran a total of twenty-three issues, with the final issue being released on October 28, 1980. Star Wars, by buoyed by the continued success of later movies, would run until 1986. As in all things, BSG played second fiddle to the Adventures of Luke Skywalker. 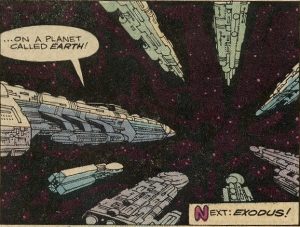 The Battlestar Galactica leads the fleet to search for Earth.

The original series of Battlestar Galactica was short-lived, but very memorable. It received a new comic book adaptation from Rob Liefeld’s Maximum Press in the mid-90s. Around the same time, Trendmasters released a new toyline based on the series. The aesthetic is very 90s, which fans who grew up with the original toys might find off-putting.

This all culminated in SciFi Channel premiering a re-imagined version of the series in 2003. Like the original, it kicked off a multi-hour special event (a four-episode mini-series this time). That was followed up by a highly-successful ongoing series and several TV movies. Since the late 90s, there has been consistent talk about doing a movie closer to the original series. Battlestar Galactica may have been short-lived, but boy did it have an impact.

Consigned, Cool, & Collected will be back next Monday with a fresh selection from this collection. And if you’ve got a collection of your own that you’re ready to sell, we are here to help!