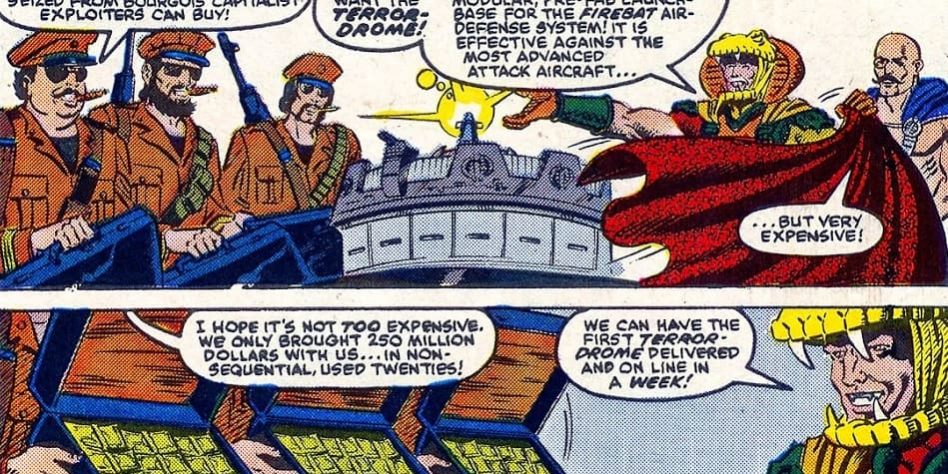 Welcome back to Consigned, Cool, & Collected! Each week, Back to the Past picks one of the hundreds of cool things we handle each and every day to highlight for our adoring public. This week’s selection comes from the same collection as last week’s Atari Lynx, specifically from the “action figure” side of it. It is The Terror Drome, Cobra’s deadly fortress! 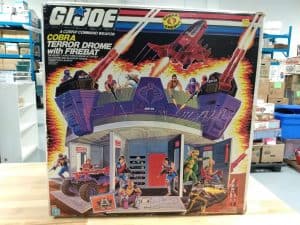 Our Terror Drome, including original box!

The Terror Drome was a relatively late addition to the G.I. Joe toyline, arriving in 1986, the line’s fifth year. By the time it hit store shelves, Cobra’s nemesis in G.I. Joe already had three playsets to call home. The largest, and at the time newest, of them was U.S.S. Flagg aircraft carrier. That sucker was six feet long and retailed for $90 (close to $250 in today’s dollars). Coming one after The Flagg, the Terror Drome was very much Cobra’s answer to it.

Standing 13″ high and measuring 21″ in diameter, the Terror Drome is big. It retailed for $45, half the price of the Flagg. The Terror Drome’s roof boasted six exterior battle stations (including two turrets) and a retractable door through which the Firebat fighter jet, which came with the playset, could be “launched”. The body consists of eight bays, each with opening exterior door and interior access doors between segments. They include two battle stations, three vehicle garages, a jail cell, and the lever raising for the Firebat. 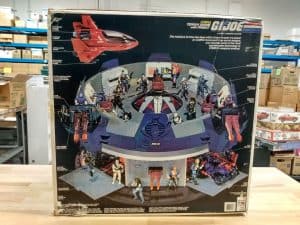 Back of the box, showing the toy set up.

All told, it is a very cool playset. It provided your Cobra figures with an imposing base of operations AND a new vehicle for fighting the Joes – what more could you want?

The Terror Drome in Adaptations

The Terror Drome made its comic book debut in G.I. Joe: A Real American Hero #54 and its cartoon debut in the season two opener “Arise, Serpentor, Arise”. As with most aspects of G.I. Joe lore, the two media two vastly different approaches to the Terror Drome. Since the original comic book series was written by series creator Larry Hama and (broadly) serves as the basis for every cartoon, movie, and comic book since the the originals, it’s generally seen as the definitive version.

The cartoon version was fairly simple: it’s Cobra’s fortress, albeit a very elaborate one.In the original Sunbow seasons, it was actually semi-concealed inside a mountain carved at its peak to resemble a giant Cobra. It wasn’t very toy-accurate, as the Terror Drome itself was just part of the fortress that stuck out. When the series was revived by DiC, it became a modestly more toy-accurate free-standing tower. 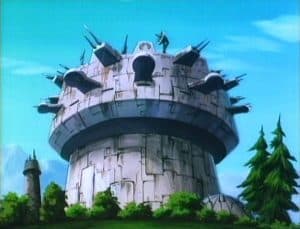 The Terror Drome from the DIC seasons of the cartoon.

The comic version, on the other hand, was even more like the toy. It was a pre-fabricated, mass produced military base and launch platform the Firebat fighter jet. Cobra keeps the original on their island to serve both as a show model and a base for their island’s security forces. Cobra funds its operations, in part, by selling Terror Dromes to governments and rebel groups hostile to the United States. As such, most of the Terror Dromes that the Joes encounter in the field aren’t operated by Cobra but by its allies.

The mass-produced Terror Dromes also have ultrasonic “Paranoia Rays” secretly installed. These broadcast in the background, increasing unrest in the population not unlike The Madbomb that bedivled Captain America in the 70s jack Kirby era.. Thus, Cobra sells more Terror Dromes and more people get more paranoid. You can take Cobra Commander out of used car sales, but you can’t take used car sales out of Cobra Commander.

The Terror Drome was only made for two years before being discontinued, which is admittedly pretty average for G.I. Joe playsets, Due to its smaller size and lower price point, it isn’t quite as rare as the U.S.S. Flagg or Defiant Space Vehicle Launch Complex. Even so, it is still a beloved and sought after piece for collectors to this day. In good condition, it makes for a gorgeous centerpiece to a Cobra-centric display. It is the largest and most elaborate Cobra base playset ever released…and one of only two overall!

Even if it sits disassembled in a storage tote, there’s some value to be found in a Terror Drome. That’s why it pays to let Back to the Past have a look at your collection before you decided to sell it a garage sale: you never know when those forgotten playthings are worth good money! And if you want to keep reading about cool stuff, Consigned, Cool, & Collected updates every Monday morning.