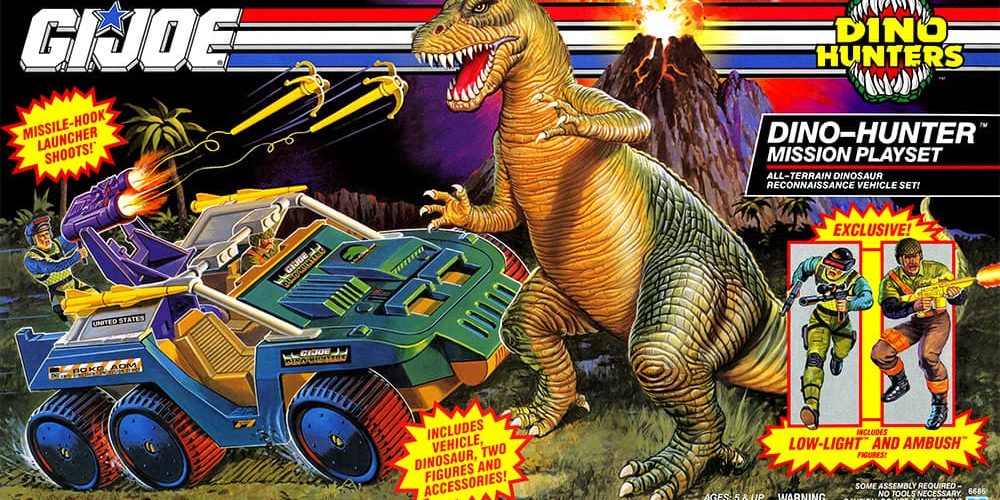 Welcome back to Consigned, Cool, & Collected! This week, we’re looking at the G.I. Joe Dino-Hunter Mission Playset, which roared onto the auction block over the weekend. Why is America’s Fighting Man hunting a T-Rex? Well, much like the blockbuster that roared into theaters over the weekend, the blame ultimately falls at the feet of Stephen Spielberg. 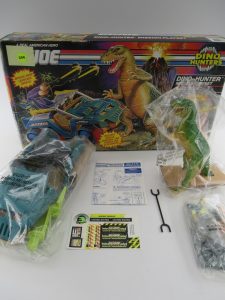 Incidentally, the rest of this collection comes to auction this Saturday (June 18). If you’re a G.I. Joe collector, it is a can’t-miss session: 150 of the 300 lots are Joes!

Jurassic Park Comes Out In 1993

That’s the main reason this toy exists. Full stop. The original Jurassic Park film hit theaters on June 11, 1993 and went on to gross $338,929,640. It was the top grossing flick of the year, almost doubling the box office take of #2 grosser (the film adaptation of The Fugitive). While little kids have always loved dinosaurs, the success of Jurassic Park lead to them having a huge pop cultural “moment” in mid 90s. The fact the dinosaur-themed Mighty Morphin’ Power Rangers both benefited from and contributed to that moment.

Also contributing and capitalizing on this was Kenner’s Jurassic Park toyline. It featured a mix of human action figures in the 5″ scale (complete with the ridiculous missile launcher accessories typical of 90s Kenner), vehicles, and – most of all – dinosaurs. Dinosaurs of various sizes, features, et al. It was a massive success and would continue for a couple years past the movie’s release. Even kids who had not seen the movie or (wrongly) had no interest in a Jeff Goldblum action figure probably had at least one of the dinosaurs.

G.I. Joe, on the other hand, was on its way out. Sales on the decade-old A Real American Hero toyline had been falling for a while, with wilder and wilder sub-lines being tried to cash in on new trends. This is the era that brings the Ninja Force, Drug Elimination Force, Mega-Marines vs. Mega-Monsters, Star Brigade, and (most bizarrely) Street Fighter II World Warriors to the G.I. Joe team. It was only natural, then, that Hasbro would try their hand at the dinosaur craze. The result was the G.I. Joe Dino-Hunter Mission playset.

The result was a spiritual throwback to the 70s G.I. Joe Adventure Team, where figure-vehicle-beast combos had been a staple. It is worth noting that the T. Rex appears to be the only wholly original piece in this set. The Dino-Hunter ATV was a repaint of the 1988 Desert Fox 6WD vehicle, with a machine gun turret swapped out for a mounted missile launcher backpack many figures were released with. It fired two missiles linked by a piece of string, ostensibly a bolo for trapping the T. Rex. 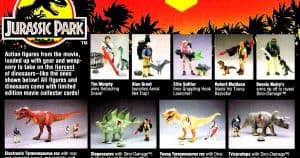 At look at the first wave of Jurassic Park toys from Kenner.

The vehicle drivers were repaints of Joes released earlier in the 90s. In fact, this set marked the fourth version of Low-Light released! Oddly, the T. Rex isn’t the most imposing dinosaur toy ever made. In fact, it most resembles something you’d have have found in a dollar store. Since Hasbro is the corporate parent of Kenner, you’d think that they could have borrowed a better mold from Jurassic Park.

The G.I. Joe Dino-Hunter Mission set was released exclusively at Toys R Us stores in 1993. It, along with the the rest of the G.I. Joe line, was discontinued in 1994. It seems to have had only middling sales, seeing neither Hasbro nor TRU commissioned more such sets. The G.I. Joe brand would be revived briefly by Kenner in 1995 in their signature 90s style as G.I. Joe Extreme, but it would quickly fade away.

Jurassic World Dominion Comes Out in 2022 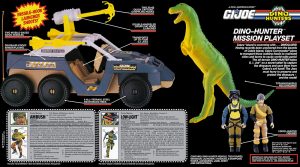 The back of the box giving a good look at everything in the set.

Fast forward nearly thirty years and…things are pretty similar. The third entry in the Jurassic World iteration of the Jurassic Park franchise hit theaters over the weekend and has a dominating presence on toy store shelves. Conversely, the only G.I. Joe toys on the shelves are Snake-Eyes-inspired ninjas and the collector’s edition Classified line. That, however, is the key difference: the G.I. Joe brand is BIG with the adult collector market.

A store exclusive from the dying days of the original series? That’s catnip to collectors. Not to toot our own horns, but our specimen was in particularly good shape –  the box was unsealed, but all the individual components were untouched. It’s no wonder that it went for hundreds of dollars – there just aren’t going to be very many of these things out there, much less ones in this good of shape.

Which is why it’s a good idea to consult with experts like your pals at Back to the Past help you with your collection! What was once a gimmicky desperation play at keeping a failing brand afloat may now be a highly-valued collector’s item. We’ve said it before and we’ll say it again: everybody knows that the first of something has collectible value, few people outside the collectibles community realize the value in the last of something.

And if you want to talk more about this, we are ALWAYS available for comment and quote. Just drops us a line below or hit us up @b2pCollect on Facebook, Twitter, LinkedIn, TikTok, Instagram, basically everywhere but Tumblr (for now).