Who is The Woman In Red? 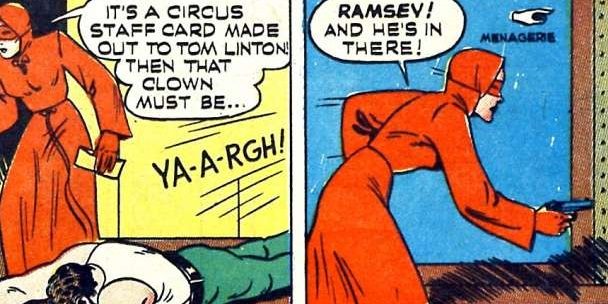 Welcome back to My Hero! Each week, Back to the Past uses this column to tell you why the obscure characters from our custom action figure collection are great! Years ago, we purchased the life’s work of an artist and comic fan whose chosen medium was granting forgotten comic characters the action figure immortality denied to them by major toymakers. We’re still sorting through it all, and we’re making new finds every week! This week’s find, who will soon be available on ebay, is The Woman In Red. 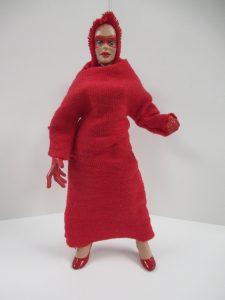 The Woman in Red as she appears in our custom figure collection.

Predating Wonder Woman by over a year and a half, The Woman in Red debuted in 1940’s Thrilling Comics #2. Unlike most masked crimefighters, she’s a sworn officer of the law. Peggy Allen is a policewoman who works exclusively undercover, gathering information in the guise of nurses or maids around criminals. When it comes time to bust the bad guys, she dons the head-to-toe uniform of the Woman in Red to protect her anonymity. Upon catching the crooks, she debriefs with the chief of police – who is well aware of her dual identity. We’re fairly certain that’s going to make building an actual court case against them a tad tough – right to face your accuser and all that.

The Woman in Red was arguably Nedor Comics top female hero in the Golden Age. Her strip appeared in thirty-four issues between 1940 and 1945, the heyday of superhero comics. She’s also an unmistakable woman of action, using martial arts and the occasional gadget to capture bad guys. In all, she was a surprisingly forward-thinking female character. 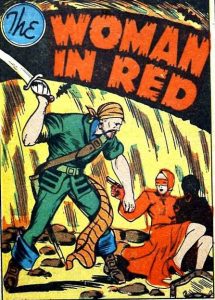 The Woman in Red as she appeared in the Golden Age. As you can see, its not the most complicated costume.

Due to her still-relevant premise and public domain status, The Woman in Red has been a fairly popular pick from small press superhero tales. In fact, she’s racked up more appearances in the modern era than she had back in the 40s! She’s part of AC Comics’ Femforce universe, Dynamite Entertainment’s Project Superpowers franchise, DC’s Tom Strong setting, Moonstone’s Lady Domino stories, and even her own ultra indie one-shot. She was even faithfully adapted into the no-budget backyard film Avenging Force: The Scarab, where her character was one of the standouts.

But even with all those appearances under her belt, you’re not going to find a commercially-produced action figure of her. No, for that sort of thing you’ll need to turn to our custom action figure collection. And if you’ve got collection like ours– be it custom figures, original art, garage kits, convention sketches, whatever – and are looking to sell it, get in touch!