Who was Elgin Baylor? 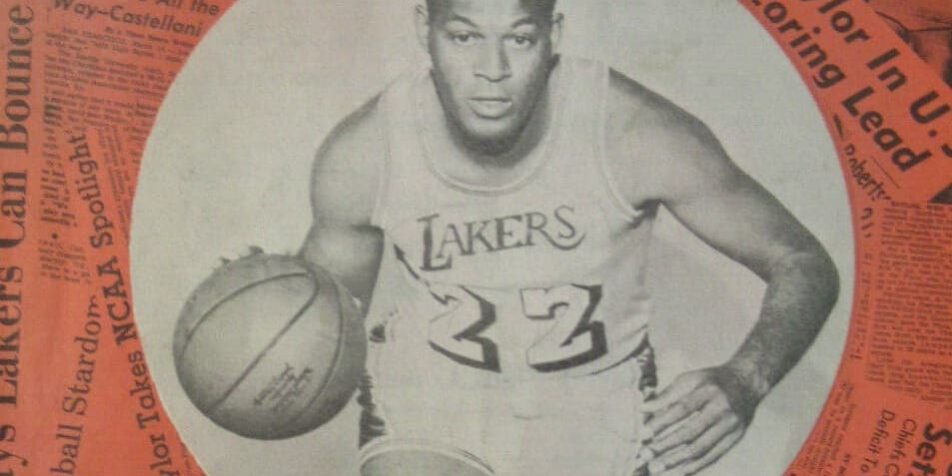 Welcome back to Consigned, Cool, & Collected! In these pages, Back to the Past dives into the histories of the cool stuff we handle each and every day. Today’s subject is the program from the March 21st 1969 basketball game played by Los Angeles Lakers against the Atlanta Hawks. That game was deemed “Elgin Baylor Night“, in honor the Lakers’ longtime star player. Elgin Baylor passed away in November 2021, and the bulk of his career happened before most folks reading this were born, so we thought we’d pay tribute to the man. 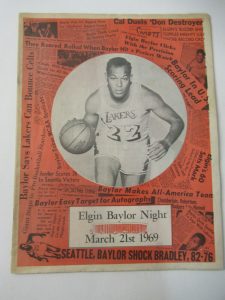 Elgin Baylor: One of the Greats

Elgin Baylor was the very first draft pick of the NBA’s 1958 draft. He was scooped up by the Minneapolis Lakers, who had come in dead last in the standings in the 1957-58 season. This proved to be a wise move on their part, as Baylor immediately distinguished himself as among the best in the league. He earned Rookie of the Year in his first season, which almost feels like an understatement since he also was the second highest scorer that season. He also placed third all time in single game scoring, at fifty-five points. Those records have since been eclipsed but were very impressive at the time.

He’s credited with leading the team to the finals in his rookie season, a major accomplishment by any standard. That said, the Boston Celtics smoked then in the first four game playoff sweep in NBA history. This kicked off a rivalry between the two teams that continues to this day. That said, going from dead last to number two in the league in a single season? That’s nothing to sneeze at.

In The Army Now

In 1960, the Minneapolis Lakers moved to Los Angeles. Their name made considerably less sense, but they were the first NBA team on the west coast and that was a big deal. Baylor’s performance continued to improve over the next few seasons, going from getting near records to setting them himself. Then, he was called up for active duty. 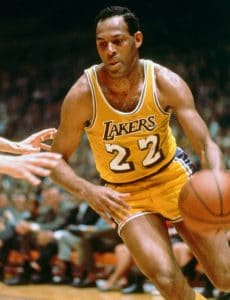 An army reservist for most of his time with the team, Baylor was called up for active duty in this man’s army just in time for the 1961-62 season. Stationed out a base in Washington, he could only play for the Lakers when he was able to get a weekend pass. He played in 48 games that season, missing fully 40% of it. Even so, he scored 1,836 points.

A Failing Body & The Front Office

Unfortunately, Baylor’s knee began giving him trouble in the 1963-64 season. This culminated in an injury that required surgery to repair the following season. Modern medicine was able to put Baylor back on the court, but he never quite got back up to 100%. That said, even 80% of Elgin Baylor’s best was damn good.

Baylor had to bow out of the 1970-71 season early due to blowing out his Achilles Tendon. Despite a heroic effort to keep going, Baylor ultimately retired after only nine games the following season. He was thirty-one years old. His bad knee was to blame, and the Lakers started a historic winning streak the game after his last. A young man named Wilt Chamberlain had joined the team in 1969, and quickly replaced Baylor as the Lakers’ star player.

Baylor took an assistant coaching position with New Orleans Jazz in 1974 but didn’t prove very good at it and retired from coaching in ’79. He followed this up with 1986 with an executive position with the Los Angeles Clippers. Held that position for 22 years, retiring in 2008 at the age of 74.

Elgin Baylor in his Golden Years.

Elgin Baylor died in November of 2021 due to natural causes. He helped mold the L.A. Lakers in the powerhouse team its known as today, beginning a dynasty that continued through the likes of Wilt Chamberlain,Shaquille O’Neal, and Kobe Bryant. 1969 was definitely in the twilight of his career, and his knee problems were already a known factor that had slowed him down considerably. The Elgin Baylor Night was a way of celebrating one of the team’s greatest players turned elder statesmen.The program from that game is a great find for any dedicated basketball fan.

If you’ve got a collection of memorabilia like it, we would love to help you sell it. Even in the rare case that we’re not the right place to sell it directly, we’ve got a little black book full of dealers who will be. And until you’re ready to sell, keep coming back each Monday to read about great stuff that’s Consigned, Cool, & Collected!