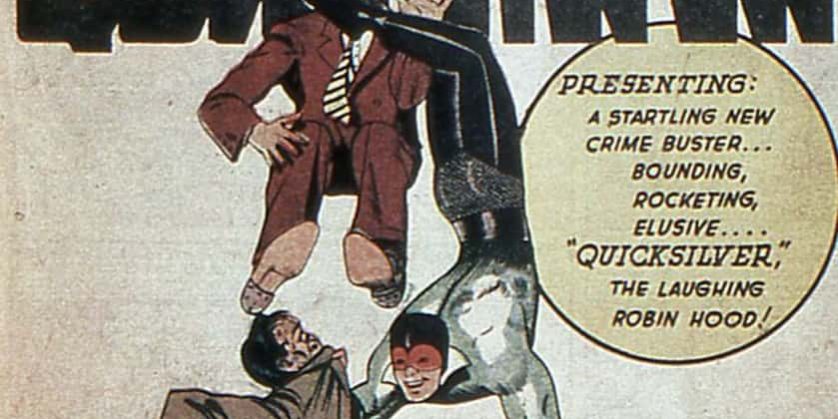 Welcome back to My Hero! Each week, Back to the Past uses this column to tell you why the obscure characters from our custom action figure collection are great! Years ago, we purchased the life’s work of an artist and comic fan whose chosen medium was granting forgotten comic characters the action figure immortality denied to them by major toymakers. We’re still sorting through it all, and we’re making new finds every week! This week’s find, who will soon be available on ebay, is the original Quicksilver! 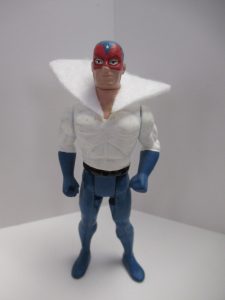 The Original Quicksilver, AKA Max Mercury, as he appears in our Custom Action Figure Collection.

Within a year of DC Comics’ introducing The Flash, Quality Comics produced their own speedster superhero. In fact,their Quicksilver is generally held to be the first imitator of the iconic Scarlet Speedster! Quicksilver set himself apart by using his speed much more acrobatically and creatively than DC’s Flash or Marvel’s Whizzer. Co-creator Jack Cole, best known for the pliabale antics of Plastic Man, probably had a lot to do with that. Quicksilver would race through sixty-eight issues of National Comics before his feature was axed when superheroes fell out of fashion after the war.

You’ll note that usually, this is where the character’s origins and alter ego are described. Well, there’s a good reason we’re not doing that this week. Like the Silver Streak, Quicksilver was never unmasked for the reader. In all his appearances, no one ever bothered to expand the character beyond his costumed adventures. No day job, no girlfriend, no nothing. How weird is that? 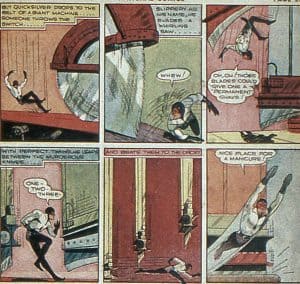 Quicksilver in action from his first appearance, both to illustrate the figure’s accuracy and what we meant by his acrobatics. 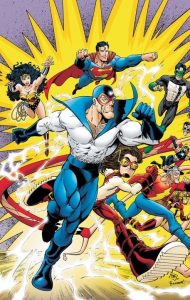 From the character’s Max Mercury era.

Weird, but advantageous. DC Comics bought Quality Comics’ library of characters in 1956, although they didn’t use any of them save for Blackhawk and Plastic Man until the 70s. Quicksilver didn’t return until The Flash #77 in 1993, forty-four years after his last Golden Age appearance. Except by then, Marvel’s version had gone on to be one of their more notable characters. The original needed a new name, fairness be danged, and that name was Max Mercury.

Thanks to Quicksilver’s complete and utter lack of backstory, Mark Waid was free to re-shape the character as he liked without worrying about contradicting old stories. Under his pen, Max Mercury became a speedster who had gained his powers in the 1830s. He works to understand the mysterious Speed Force that grants him his abilities, and his experiments keep sending him forward in time. That’s how he ends up an adventurer during World War II, and how he ended up mentoring Wally “The Flash” West and Bart “Impulse” Allen in the ways of super speed.

There’s been exactly one action figure of this character made in his eighty year history. That  was a DC Direct figure of his aged-up Max Mercury incarnation as he appeared in the pages of DC’s Impulse. If you’re a fan of the Quality Comics Quicksilver era, you’re out of luck…at least you will be once our custom action figure sells! And If you’ve got collection like our Custom Action Figures – be it original art, garage kits, convention sketches, whatever – and want to bring it to market, get in touch!