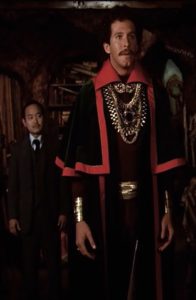 Dr. Strange, in his 1st costume, with Wong.

Welcome back to 1 out of 5 – Would Recommend, which has been awoken from its eldritch slumber to celebrate the impending release of Avengers: Infinity War. Since it’s the second MCU flick in which Dr. Stephen Strange will play a major role (after his solo flick, natch), we’re watching the good doctor’s first feature length outing – 1978’s Doctor Strange telefilm!

Lindmer (John Mills), the Sorcerer Supreme of Earth, is nearing the end of his reign. This has allowed his enemies, exiled to 4th Dimension, a chance to return to our world – so they’ve sent his ancient foe Morgan Le Fay (Jessica Walter) to kill him and/or prevent him from training a successor. That successor is fated to be Dr. Stephen Strange (Peter Hooten), a hospital psychiatrist whose life will soon be bound to that of Clea Lake (Eddie Benton), an innocent young woman whose mind is broken by Morgan’s magics. This sets the forces of good and evil on a collision course that will decide the fate of humanity itself!

Y’know, Scott wore the same outfit when he hired me.

Universal Television, the same studio that brought us the two Captain America telefilms previously discussed in this column, as well as the Incredible Hulk TV series and telefilms. As such, they are responsible for Captain America, Dr. Strange, The Hulk, Thor, and Daredevil’s live action debuts – though only one of those was actually a success.

The flick is no more or less cheesy than any other Marvel TV movie of the era. It’s fun, but no great shakes for people who weren’t there when it aired. Worth a watch, if you are into such things. We buy movie and tv collectibles for top dollar. 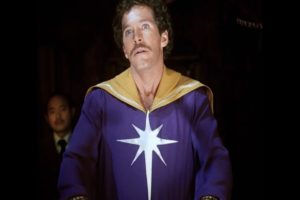