1 out of 5 – Would Recommend – Five Reasons to Watch MST3k, The Sci-Fi Years! 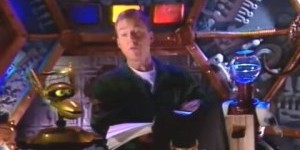 Welcome back to 1 out of 5 – Would Recommend, where we’re breaking from the usual format to once more pay homage to a funnier and more famous band of bad movie lovers: the stars of Mystery Science Theater 3000! 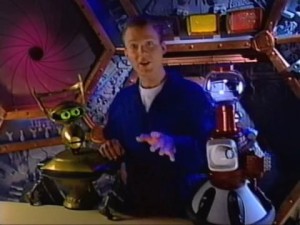 If you want a catchy explanation of the show’s plot, just give the expository theme song a listen! Everyman Mike Nelson (played by…Mike Nelson) has been trapped on a space station by mad scientist Pearl Forrester (Mary Jo Pehl) and is forced to watch bad movies in an attempt to drive him insane. His robotic companions Tom Servo (Kevin Murphy) and Crow T. Robot (Bill Corbett) help him keep his sanity by mocking the movies with him, which is the show’s true raison d’etre. Pearl has her own set of assistants – also played by Murphy and Corbett – though they are more a hindrance to her plans of world domination than anything else.

The cast of this iteration of MST3k – as of season eight, none of the original cast was around – has gone on to create RiffTrax, a site we’ve plugged before. If you dig RiffTrax, you will almost certainly enjoy this era of Mystery Science Theater.

1) Werewolf (Season 9) – a 1996 direct-to-video horror movie featuring Joe Estevez (least of the mighty Sheen Acting Family) in a minor role. An ancient werewolf skeleton is unearthed and a corrupt anthropologist uses it to turn his rivals into werewolves.  A beautiful female colleague with an un-placeable accent and her boyfriend to put a stop to his shenanigans. The movie itself is a bit of snooze, although the riffers do have plenty to work with, but it produced one of the most memorable gags in MST3k/RiffTrax history. That alone is pretty much worth the price of admission, which is zero dollar since it is available in full on YouTube. 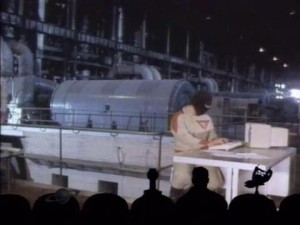 “The boiler room has a receptionist?”

2) Space Mutiny (Season 8) – A film already chronicled in the pages of this column, Space Mutiny is a damned fine episode of MST3k. Hotshot fighter pilot Dave Ryder (Reb Brown) joins the crew of a generational starship that is totally not the original Galactica just in time to stop a poorly conceived mutiny. Low budget sci-fi action ensues. The episode is probably most famous for its running gag of renaming the protagonist in a manner more appropriate for his physique, such as Punch Sideiron, Buff Hardback, Crunch Buttsteak, Touch Rustrod, and Bob Johnson,  but the whole thing is an exercise in hilarity and a good go-to for people new to the series. It’s not yet legally available on YouTube. Wink. Nudge. 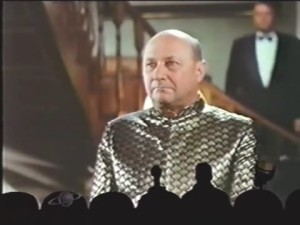 “My name is Pleasence and I am funky.”

3) The Pumaman (Season 9) – A mild-mannered American archaeologist living in London finds out that he’s the Aztec super hero known as The Pumaman! He has all the powers of the majestic puma – the ability to rear project major cities, teleportation, astral projection, the ability to rip up metal with his bare hands, the ability to die temporarily, a nice pair of slacks, etc. Thrill as he does battle with Kobras, an evil mastermind played by Donald “I Was In Halloween Dammit” Pleasence, who intends to use an Aztec artifact to conquer the planet! Marvel at his lazy theme song and lyrics Mike & The ‘Bots write for it (“Pu-ma-man, he flies like a moron“)! Best of all, it is available free and legal on YouTube! 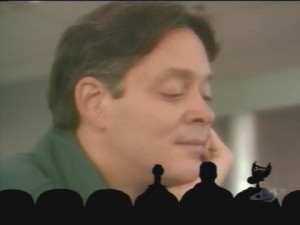 “Man, never show a good movie in the middle of your crappy movie.”

4) Overdrawn At The Memory Bank  (Season 8) – Vaguely dystopian cyber sci-fi on a PBS original budget, starring the late Raul Julia (Street Fighter, among better films). Julia is a disobedient office drone sent in for a mandatory mind-swap vacation whose body gets misplaced while his mind inhabits stock footage of a monkey. He’s parked in the central computer until things can be sorted out, where he finds that he finds that he has godlike control of the digital world. And then things start getting weird. This episode is not available legally on YouTube, but that doesn’t stop the fandom that coined the phrase “keep circulating the tapes”. 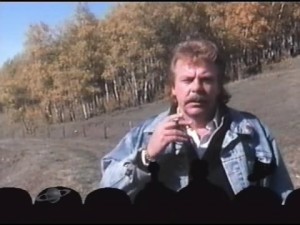 “Is he a make-upless clown?”

5) The Final Sacrifice (Season 9) – A young boy embarks on a journey to solve the mystery of his journalist father’s mysterious death years before. Along the way he links up with middle-aged drunken drifter Zap Rowsdower (LITERALLY THE BEST NAME EVER IN A MOVIE), who turns out to be both an acquaintance of his dad’s and a former acolyte of the cult that killed him. Adventure ensues.  Memorably includes an over-the-top Canada bashing song that easily ranks as one of the funniest host segments the show ever had. It is available legally and in full on YouTube.

Two reasons: First, MST3k is a solid source of material for this column – if they featured a movie, chances are its worth watching. Second, because the stars of this season are back in theaters on July 9th to make fun of Sharknado 2: The Second One! It’s sure to be a good time, so spend the next two days pregaming with the best of their Mystery Science Theater 3000 output! 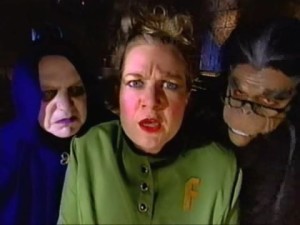 Imagine this but with Mike, Scott, and Dennis and you have the reason I write this column.

NEXT WEEK: In celebration of Ant-Man finally hitting theaters, we’re gonna Hassle the Hoff with the Nick Fury: Agent of SHIELD TV movie from 1998!

Category: TV & MoviesBy Chris WalkerJuly 7, 2015Leave a comment
Tags: 1 Out of 5 Would RecommendMST3KRiffTrax