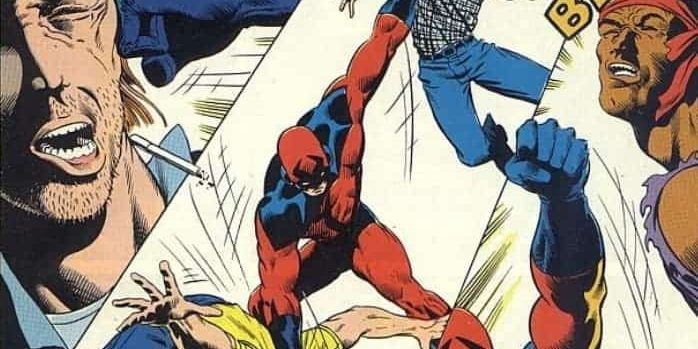 Welcome back to My Hero! Each week, Back to the Past uses this column to tell you why the obscure characters from our custom action figure collection are great! Years ago, we purchased the life’s work of an artist and comic fan whose chosen medium was granting forgotten comic characters the action figure immortality denied to them by major toymakers. We’re still sorting through it all, and we’re making new finds every week! This week’s find, who will soon be available on eBay, is The Scarlet Scorpion. In keeping with our month-long celebration of indie comics heroes, he’s a creation of AC Comics. 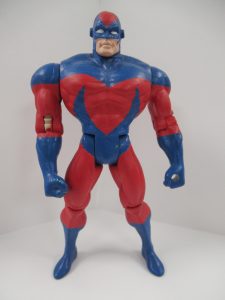 The Scarlet Scorpion as he appears in our Custom Action Figure Collection!

Inspired By The Blue Beetle

AC Comics is best known today for their incredibly long-running, Good-Girl-Art-influenced series Femforce, which launched in 1986. However, before that they tried to be known for something else: the Charlton Comics heroes. Americomics #3, their flagship anthology title, starred both of Charlton’s Blue Beetles. That same month, Americomics Special #1 featured Charlton’s most iconic heroes – who would go on to inspire the heroes of Watchmen – banding together as a team for the first time.The Sentinels of Justice were born!

Sadly, this was not to last. DC Comics soon bought Charlton’s intellectual property and integrated them into their universe. AC Comics would pivot to focusing on their original slate of characters. The Sentinels of Justice were, accordingly, re-imagined…but one of them looked kinda familiar.

The eighth and final issue of Americomics reintroduced a hero who dates back to AC Comics’ black-and-white fanzine days: The Scarlet Scorpion! His origin was told for the first time, all in glorious color. Truck driver Mike McCluskey crashes his semi while setting out from New Jersey, left horribly burned and clinging to life in the hospital. At hospital at which Dr. Myla Chang is working on a virus that will supercharge the body’s healing ability. Or “was” working on, as her funding’s been cut. Seeing Mike is bound for the grave anyways, she performs a lil bit of unlicensed human experimentation. 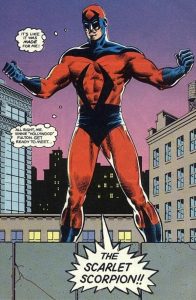 Which leads to Mike making a full recovery over night. Only his problems are just beginning: it seems Mike was running shipments for the mob on the side. And the crashed truck had some contraband in it. Now, it looks like their stuff was destroyed in a crash that the driver walked away from without a scratch. They torture Mike to get him to fess up as to what really happened before shooting him and dumping him into the river.

Naturally, Mike’s new powers help him heal from that too. Confronted by his doctor and a police inspector, he fesses up about his mob ties and opines that he’d love to get himself some revenge. This prompts the inspector to talk about a similarly wronged man who, many years before, had donned a costume to get vengeance on the mob. He disappeared, but the police found and took possession of his costume. Why, it’s sitting unused in the evidence locker to this day! Anyhow, shame you can’t do anything about the mob, Mike.

Taking the hint, Mike breaks in to the precinct and makes the Scarlet Scorpion suit his own. As the successor to the vigilante’s mantle, he takes down the mobsters who have been hassling him. He would go on to help Captain Paragon found the Sentinels of Justice, and continues to appear sporadically in the AC Comics universe to this day.

Scarlet Scorpion is a nifty hero in the mold of the Blue Beetle, and it’s a shame he never really took off. Interestingly, his powers and origin actually more closely resemble a different Steve Ditko co-creation, Atlas Comics’ Destructor. Like all of AC’s heroes, he missed out on the action figure craze of the 90s. If you want a Scarlet Scorpion to call your very own, you’ll need our Custom Action Figure collection. And if you’ve got collection like our custom figures, be it more customs, original art, garage kits, convention sketches, whatever – and are looking to sell it, get in touch!