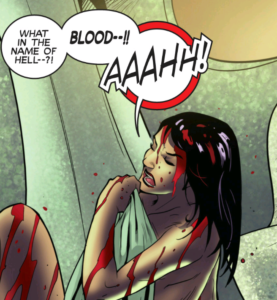 Not Vampi’s usual reaction to a blood shower.

Welcome back to Strange Times & Places, where time once more got away from me. We’re checking out another one-shot in Dynamite’s Altered States line this week, Altered States: Vampirella #1.

This is an imaginary story, flipping the traditional Vampirella origin tale on its head and tossing in some elements of Edgar Rice Burroughs’ John Carter of Mars for good measure.
If you’re not familiar with Vampirella’s classic origin, her recommended 1-out-of-5 feature from 1996 is a good primer.  This also happens to be the third AU version of Vampi featured here, something of an oddity for a non-big two character.

In the not-too-distant future, the first manned mission to Jupiter is finally arriving at its destination. However, they discover and run afoul of an ancient alien stargate in the gas giant’s orbit. It sends them untold light years across the universe to the planet Drakulon, resulting in a crash that kills all but the ship’s chief engineer Ella. She has quickly taken in and showed hospitality by some locals, but will soon find that she may just be a monster on the planet Drakulon… 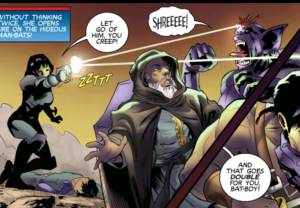 How Ella gets in good with the natives.

If sci-fi has taught me anything, it’s that you don’t just leave Stargates lying around where younger races can find them.

Come Back Next Week for a Pop Culture Blog of Some Kind. I Promise Nothing More.